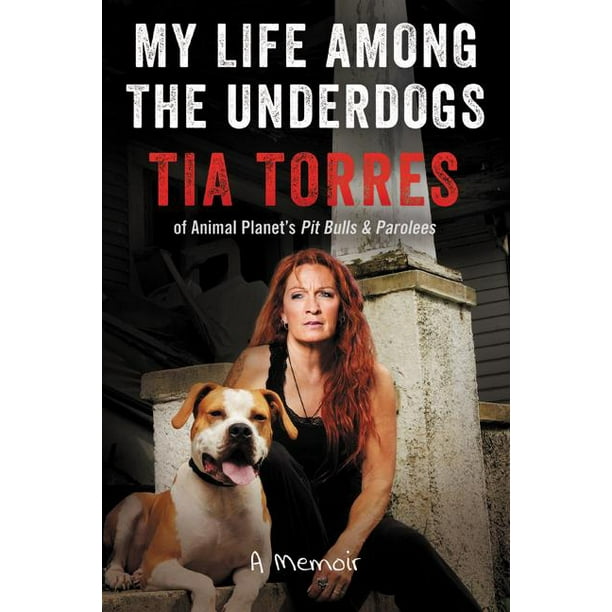 My Life Among the Underdogs : A Memoir

We aim to show you accurate product information. Manufacturers, suppliers and others provide what you see here, and we have not verified it.
MY LIFE AMONG THE UNDERDOGS (HCVR)

From one of the most respected figures in the dog rescue community come the harrowing, funny, and inspiring stories of nine incredible dogs that shaped her life.

Tia Torres, beloved underdog advocate and star of Animal Planet's hit show Pit Bulls & Parolees, chronicles her roller-coaster life in this heartwarming memoir featuring some of her best-loved dogs. With inimitable honesty and characteristic brashness, Tia captures the spirit and heart of these intelligent and loving canines, while carrying us behind the scenes of her TV show, into the heart of post-Katrina New Orleans, onto the soundstages of Hollywood films, and even to the jungles of Sri Lanka.

Tia has devoted her life to shattering the stereotype that pit bulls are dangerous, vicious predators. As the top dog at the Villalobos Rescue Center in New Orleans, the largest pit bull rescue in the United States, she and her team have rescued, rehabilitated, and rehomed hundreds of animals that might otherwise have been destroyed. As she puts it, "Most of the stories in this book are about animals (and a few humans) that needed someone to believe in them and a purpose in order to show their true nobility."

Each dog Tia writes about here has overcome abuse, trauma, neglect, or just bad luck to become a stalwart, loving companion to Tia and her family. You'll meet Duke, whose intelligence and matinee-idol looks made him a star in movies and music videos; Junkyard Joe, whose single-minded passion for tennis balls was channeled into expertise as a drug-sniffing dog; Bluie, the unswerving protector of Tia's daughter Tania; and a host of other unforgettable canines.

My Life Among the Underdogs is above all a love story--one that is sure to grip the heart of anyone who has ever loved a dog.

What others said when purchasing this item
gift for my daughter, she's a fan and we have visited the rescue in New Orleans.
Davone, purchased on September 10, 2020

My Life Among The Underdogs by Tia Torres

. Tia Torres book was so good. I watch PitBulls and Paroles. I enjoyed reading about all the jobs she has had and how special the dogs are to her. Her book is well written. She is a natural. I hope she will write another one.

Was a great book made me laugh and cry . And gained even more respect for Tia and what she does.

Easy to use the web site. Many options for the type of cover and audio. Took longer than I wanted to get it, but worth the wait. Overall I am very happy with my purchase.

I think it's fair to say Tia Torres, founder and head of Villalobos Rescue Center, has lived a varied and interesting life. She has, especially, known a lot of wonderful, challenging, and interesting dogs. She tells her story organized around those dogs--Cougar, Duke, Moose, Lucky, and others, in California and in Louisiana. The rescue started as a wolf and wolf mix rescue, and the shift to pit bulls was gradual and almost accidental. Working with wolves and, as a trainer for the entertainment industry, with a variety of large and dangerous animals, she developed a confidence and an awareness of body language that helped her both to work with dogs, and to establish her reputation with the rescue community. Her more chaotic and unreliable relationships with her fellow human beings also helped to focus her attentions and efforts on dogs. Torres is a great storyteller, and in both the writing and the reading she makes her experiences compelling and absorbing. Yet she's also a very private person, and there are a lot of things I'd be interested to know more about, that she simply passes over. She respects her own privacy, and doesn't share what she doesn't want to share. Nor is she overly concerned about linear storytelling. Each of the chapters is orderly in itself, but the arrangement of them is more a flowing from theme to theme, than starting at the beginning of her story and continuing on to the present time. Sometimes this means we get two different perspectives on the same incident, how it seemed at the time, and how it seemed later, after more reflection and/or more information. Because this is a book about Tia Torres' lifetime in animal rescue, it unavoidably involves some dogs, some dogs very important to her and to her four children, dying. There's no avoiding it in telling her story properly, but for some people, who would otherwise love the book, that will be a deal-breaker. That's unfortunate, but neither do I want to trick anyone into starting a book that they won't be able to enjoy and finish. It's an excellent book, though, and highly recommended. I bought this audiobook.

Reviewed by LisCareyLisCarey
Written by a librarything.com customer.
Helpful?