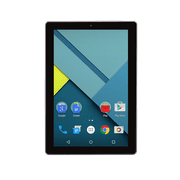 Grate for the price

Not bad for a basic tablet

For basic use and streaming it does well. It is musch better than the RCA tabs and compared to the Samsung Tab E 7 it seems to have more options in a bigger package at the same price. The only reason I did not give it 5 stars was even though it has 2 front facing speakers which is nice they sound ok but do not get loud enough.

I bought two of these tablets and both was freezing up due to it having only 1GB of memory. Also, some of the Google Apps isn't compatible with this probably because the Android O.S is old being at 6.0.1 and the newest is 8.0 and you can't even update to 7.0 version. The extended warranty was a little high on this being $37.00 for a $98.00 tablet but I can buy a laptop for $149.00 and still pay $37.00 for warranty. I will return both tomorrow.

my husband and I bought it for my mom's birthday it only worked 48 hours by that time she needed to charge it she realized the cord was stripped for the charger and it was still in the baggie then the next day the tablet screen went black and the charger battery doesn't hold up long at all we paid less money for our tablet off Amazon and we've had it for 2 years with no issues.... really upset with this product Walmart is selling I'm going to return it today so we will see how that goes if I have any issues I will update my review...... and I was in the store when I bought it I always read reviews before buying things I didn't read the reviews till after I bought it and it didn't work enter at your own risk good luck but now I have to return junk while somebody watches my daughter an infant son so I can go stand in line for an hour to return it all because I didn't read the reviews =(

Not worth the money. I've owned this tablet for 4 days, and its been nothing but slow! It freezes constantly. Force closes every app I downloaded. I regret not listening to the people already reviewed this product. Not satisfied at all!

Charging in device defective after only two months

I was satified until the product stop wanting to charge. I have only had this for about two months. Poor quality if the product doesnot last more that two months. As you can see its plugged in and not light showing its charging

Just purchased this got home put it on the charger about two hours later tryed to turn it on , and then it doesn’t turn on at all called Walmart , was told to bring it back but honestly this made me not even want the product no more because there is no reason why a brand new product shouldn’t work

This Tablet is Terrible!!

I can't believe I wasted 100 bucks on this tablet! I have a Samsung Galaxy Tab S 10.5 that's 4 years old and still runs better than this one! This one is supposed to be powered by Intel, but this tablet overheats every time I do anything! Then it dims my lighting because "the tablet is overheating!" You guys shouldn't require a pass key to unlock the tablet because it sucks so bad nobody would want to steal it. I can't even type this review because it keeps freezing! Don't buy this brand. They don't even have customer service! Buy Samsung, its worth the money!

What a piece of junk!!!!! Second tablet in a week.... Freezing, slow, constant updates...DO NOT BUY THIS PIECE OF GARBAGE!!!!!! You will be dissatisfied just like the rest.

Terrible, constantly overheating SD card reader doesn't work. Extremely slow. I've had it a bout six months with no improvement. Just waiting for it to catch fire so I can get a better one.

This contraction doesn't even deserve a one star. The pictures are good but i cannot even stay on system longer than 2-5 minutes or less and I am stuck or frozen. -

Wasted $200 on 2 of these tablets. Never worked that well, really slow and kept freezing! After about a month had a hard time keeping them charged and now here we are about 2 months later and one of the tablets won’t even turn on!

wireless connection wouldn't connect at all! Couldn't even pick up the high speed network when placed right next to it. Don't buy it! Returned it the same day.

NEXTBOOK = JUNK (Subtitled - DO NOT BUY!)

I wish it were possible to give something LESS than one star, because this piece of junk deserves it! Personally, this is my second Android tablet, I have several friends who own Droids too, and all I have seen ANY of them do is update themselves and crash. When purchased, it had Android 6.0.1 installed on it and was intended to be an e-book reader, (it doesn't even do that well) and lo and behold, when I called the company about the problems (even though I had only had I three months) I was informed that it was more than a year old and they would not honor the warranty. What a joke... When Android Tablets work as well as some Android Phones, I'll consider buying another one, until then, save your money, avoid the headaches and go buy a Microsoft Surface Tablet.

If it was free you paid too much

This is hot garbage, I get it "you get what you pay for" but if you think 100 is cheap for an unusable piece of plastic this is your tablet. The only reason I got it was the Samsung selection was weak, they had a 7" and 8"and this had better specs so I figured I'd try it. Bought it 24 hours ago, and it's going back in the morning. Run 1 app and it hangs constantly,I can't find anything positive to say about it except it looks ok. This thing hangs on literally everything it does, if you have 1 app or window open it hangs immediately. Now I didn't expect a powerhouse, just something i could watch streaming apps on while I'm out of town and use Google maps to see where things were in the area it won't do either. Battery is terrible, it came completely charged out of the box used it about 2 hours, dead. After a recharge it didn't last that long, used it at full recharge for about 45 min and put in standby after force quitting all the apps and it was dead a couple hours later, don't waste your money.

I bought this tablet without reading the reviews and boy did I learn the hard way this tablet sucks super slow and it freezes all the time!!!

This is the slowest device I have ever used! I would never recommend this, not even to my worst enemy. Constantly doing device maintenance and rebooting.... waste of $100!

looks good but overheats even when doing nothing.

got this a for $99 it was a steal. good display, hdmi out, etc. but upon using the tablet display kept dimming saying thermal throttling active....even when the tablet wasn't doing anything. Returned it and didn't get another as a quick google search unfortunately shows this is a rather normal problem across this brands entire line.