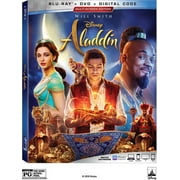 A good movie, I liked some scenes from the cartoon better and some scenes from this movie better. I think Robin William's singing was a tad better than Will Smith's, however, both movies have their place. What stood out to me most, was that a couple of scenes looked like they must have taken months to finish. The movie mostly follows the same story as the cartoon. The story is basically the same, the presentation differs as well as the detail. This movie is appropriate for all ages.

Nice movie for the fam. Definitely got it for a great price.

Excellent movie i highly recommend it

Happy to add this to my collection. It is just as great as the original in its own way. I am so happy I decided to purchase it. Can't stop watching it!

Physically the product is great(not a great movie)

I will review the product and not the movie. The physical movie it's self is great. it was securely attached in its both, the digital download was easy to use, and it looks great in Blu-ray. That being said, I'm not a big fan of this movie. The guy playing Aladdin is very monotone and lacks inflection when her sings. he really lacks inflection through most of the movie. To contrast that, Jasmin was a little over the top. Jafar isn't scary at all. he just looks like the IT guy down at the office. He lacked the looks and mannerism of a convincing villain. I guess that doesn't really matter though, because my daughter loves it and it is for kids after all.

I give Disney's Aladdin Blu-ray movie 5 Stars noting the enhanced color and sound. Disney brought back Aladdin of years ago with an updated version. I enjoyed the story and music like all Disney's classics.

Ordered this movie for my special needs daughter. She really loves all the Disney movies, watches it almost every day since she got it. She loves the music and singing. It's a great movie for kids and families.

I loved this film, Will is great as ‍️ genie, The film has its own charm, Just remember this is not Robin Williams, no one can take his place.

i love this movie. worth a watch!

The movie was wonderful. It is one of my favorites.

This movie is great, just like the animated versión. Funny, with a little action, and very cheerful, I definitely recommend it.

Overall, I thoroughly enjoyed returning to Agrabah with Disney's Aladdin. While the film likely won't hold much prominence in Oscar season next year (although my vote's in for “Speechless” to win Best Original Song), Aladdin was exactly the feel-good movie that I needed. I went into the theater to see Aladdin with lower expectations than usual, but the new songs, twists, and characters truly blew me away. Aladdin was successful in immersing viewers into a whole new world, and it had the perfect mix of laughs, tears, and action. This live-action remake had “big shoes to fill” following the amazing success of 1992 animated Aladdin, but it quickly set itself apart as show-stopping and memorable. Altogether, I can easily say that I'll be watching Aladdin countless times when it is released on DVD and Disney+ later this year, and I won't be “Speechless” about it. To read my FULL REVIEW of Aladdin, visit http://magicallyeverafter.home.blog/2019/06/08/live-action-aladdin-review/

While it kept most of the feel of the animated version, it was definitely it's own movie! I loved it! I'm certainly glad we didn't listen to the critics that complained about "rap music" which wasn't IN the movie, just in the credits, and "Jasmine is too prominent, or strong". . . And she should be! She is the goal of Aladdin all along. If she were a meek lamb, he wouldn't have ever met her. I wasn't sure Will Smith could pull off the Genie, but he did! Awesome job to the cast! Effects were great and the story, perfect!

I came before expected date. Had to have for my Disney collection.

great way to get it to you

Great! We loved this movie just like the antimated one.

I really liked this Aladdin, I liked that it made me laugh and sing along with my favourite songs. I liked that Will Smith didn't try to be Robin Williams and made the genie his own character. I liked the new song speechless.

I love this movie, Will Smith dose a fantastic job as the Genie. Bringing his modern twist to Genie. Love the rest of the cast, Disney did a great job bringing the cartoon to real life.