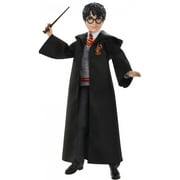 My granddaughter loved it!

A must have for Harry Potter fans and doll collectors! Articulation is a major plus!

Bought Harry and Ron from a local store around mid December, McGonagall in January, and Hermione around March a few weeks before I saw Draco's appear in stores around me. Bought him shortly after that, and Ginny is next. I've been very impressed with them. My absolute favorite thing about this set has to be their high quality joints and faces, something I miss seeing in other doll recently. Harry is about the same height as a Monster High doll. I’m not a fan of sculpted hair, but Harry’s is in a very nice style that suits him. It also makes his glasses much easier to enjoy and harder to lose sin his hair as holes to hold them up. His glasses are made of thick plastic. The only way they could be better was it the had lenses. His face sculpt takes me right back to the first movie. It is amazingly sculpted and I love his little smirk so much. His face up is also lovely, but simple. His scare is well placed (at least I think), and his eyes are such a lovely shade. If I had one real complaint about this doll though, they would be it; beautiful as they are, I wish they were green like in the books. As mentioned, Harry is not just a pretty face; his body is well built with great joints. I love that he can sit at a table to do homework like a real person would AND with a wrist joint, Harry can even dual out some spells too! Oh my goodness! I really can’t express how happy that made me when first looking at him! Speaking of dualing, Harry comes with his wand. And yes, it is HIS wand. This tiny replica is sculpted perfectly but is one flat color and could use a little paint to be perfect. His outfit is nice. Although I like more clothing pieces myself, the screen printing of Harry’s outfit is very. His dress pants also fit him in a way that doesn’t snap the velcro when he sits. He also comes with his class robe, which is not pictured. It fits nicely, but I like them better without it. Nice to have the option to have. I hope you make more characters in the future, like Luna, Neville, Snape, and the rest of the Weasley family or anyone else. It you keep up with this quality, I’d even consider buying Umbridge and Voldemort. I’d also LOVE to see Hagrid, but I know he’s unlikely since he would take more plastic to make. I would pay more for him, though. I also hope another Draco is in the making, but with is wand and in his school uniform like these.

A definite must for Potter-heads!

Comes in it's own plastic display case

great for any harry potter fan!

this harry potter doll is great for any harry potter collector! doll is a true replica and has great details such as harry potter's iconic scar and glasses. outfit and wand also make the doll look just like his character in the movies.

I enjoy the Harry Potter figures very much!

I bought the entire set! I purchased some in the store, and ordered some online. I am a huge Harry Potter geek, and a Barbie fan, so I was happy to see these dolls. They are an affordable alternative to the expensive action figures. For a figure in this price range, the head sculpts are nice and the clothing has nice details.

I like him because he is really weird with that scar.

The doll was well constructed and all joints moved realistically. The outfit was on point.

Awesome detail. Everything you would want in the doll

A standard figurine doll, good quality, and excellent price for this collection... A nice addition for Harry Potter fans!

This was well made as far as I can tell. It was purchased as a Christmas gift and I am sure it will be enjoyed by my niece. It seems to be detailed and accurate to the movie. The colors are bright and everything looked nice. For the price it seems like a good value for my money.

Great joints for posing/playing and a realistic head sculpt

He came with a broken leg, looks nothing like Harry potter.

The book makes such a big deal about his green eyes. Seems like the people who made this doll with blue eyes didn't read the novels.

My great grandson has read all the Harry Potter books. He is collecting all the dolls. He told me he wanted Harry Potter because he did not have him. Got him for his birthday in June. He will be so happy.

I love these dolls. The best made yet. Purchased 2 sets of the 6 characters. They look like the characters. Would like to have seen Hagrith too. Mattel?