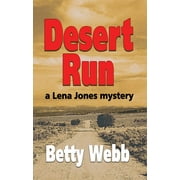 The fourth in Betty We...

The fourth in Betty Webb's Lena Jones series is loosely based on events near WW II-era German POW Camp Papago close to Phoenix. Webb is evolving more complexity into Lena's character, and I like that she does the unexpected. This series is beginning to evoke similar elements of Cara Black's Aimee Luduc series, set in Paris.