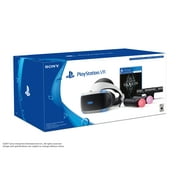 The only place I found the skyrim 5 vr bundle and it was still more afordable than I would have expected it to cost? I love shopping at walmart I always come out with great values.

Everything! This is the only bundle out now with the updated headset. I preordered the PS VR launch bundle, had it since day1, and sold it so I could pick this bundle up on 11/17. The new headset model is impressive. Fixed all the issues with the release model. HDR passthrough without unplugging cables, single cable to the headset as opposed to the double on the original, power and volume controls are now on the headset itself-instead of on the power cable. Skyrim is incredible in VR as well. If you liked it before, you'll love it now! It released with the bundle, so getting a brand new release with such an amazing product is a win/win. Skyrim VR is a full retail $60 title, so you're pretty much getting the VR bundle for only $250. If you're in the market, and ready to experience PS VR for yourself, pick it up now.... before the price goes back to $450

Wicked device! I highly recommend this to any and all gamers far and wide. I'm a huge xbox fan but this is truly next gen stuff. Total immersion on a true 3d world. And now with the permanent price drop it's never been a better time... Run to the store and grab your PS VR!!!

Good VR Experience but with few games to choose from. Hope fully things get better in the future.

I love my PSVR, actually bought this as an upgrade to the original.

On sale ,well worth it ,lots of fun

love this bundle so much. the VR makes Skyrim so much better, I do get a little motion sickness when going up or down stairs. but the graphics on this VR game is awesome.

It's fun and my kids love the game that comes with it. Not hard to set up or install.

It works well with my Playstation, getting to play Beat Saber and get a workout