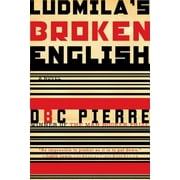 I'm a huge fan of DBC Pierre's first novel, Vernon God Little, so was looking forward to reading this. I enjoyed it, though it wasn't quite up to the standards of 'Vernon' - a hard act to follow! The best thing about Pierre's writing is the quirky way he describes things - who else could bring together Heathrow Airport and the female reproductive organs in a simile that works perfectly! Not to mention the character who 'only saw his words to the door of his mouth, didn't project them out' - witty observations of small details like this were the highlight of the book for me. The author sticks rigidly to the maxim 'show, don't tell' throughout, meaning that very little is explained straightforwardly, and the style of the narrative means it isn't always totally clear what is being shown either. Generally it's a case of waiting until a character who knows what is going on enters the scene. There were many points in the novel where I felt perilously close to losing the plot altogether - often when the Russian characters were arguing in their very particular style - though somehow it managed to come together at the last minute. The final few chapters pack a punch or two, and though some of the events jar a little, bearing in mind the almost slapstick humour that precedes them, I am sure there is a symbolic message in there. I may just have to read the book again to figure out what it is.

I was expecting alot f...

I was expecting alot from this book after the masterpiece that was DBC Pierre's Vernon God Little. In one sense, this book deserves I'd say technically 3 1/2 stars because at the very least it shows how versatile the author can be and it's a rather interesting idea to juxtapose recently separated (previously conjoined) adult British twins with the story of a woman struggling to get her family out of desperate poverty in rural war torn Russia. At the same time, it's a little helter skelter disjointed and always doesn't make the most amount of sense. It's worth reading if you're a fan of the author's and have already read Vernon God Little..otherwise, there's plenty of other novels out there I'd recommend first.

I thought this was dis...

I thought this was disspointing compared to Vernon God Little. The story takes so long to unfold, and most of the action is in the last quarter of the book where the story, by contrast, feels too rushed. The dialogue can also be a little hard to follow at times.

Unreadable. Such a di...