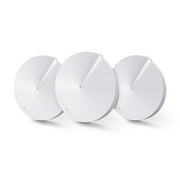 I have an 80+ year old 4000 sq ft 2 story house with a full basement and plaster/metal lathe walls. My previous router and range extender dropped the internet connection often. My devices would often not find the range extender when I moved out of range for the base router. I have been following mesh router Wifi technology for awhile, but was unwilling to switch because of the high price and unattractive units from the top rated offerings. When I read the reviews and saw the price (50% of the other highly rated systems) I bought the TP LInk Deco M5 unit. Since its installation 5 weeks ago, we have not lost the internet once. We subscribe to Charter/Spectrums 100 meg service. At the farthest points in our house we regularly get download speeds exceeding 100 megs. I even get service in my yard 50 ft away from the house! My only complaint was not being told that during setup I would not see the Wifi connected signal on my phone as the units were communicating with my phone via bluetooth until all 3 were set up. I highly recommend this system!

Easy to install and use.

The TP-Link Deco was purchased less than a month ago and it has been working ever since. The Deco is a whole home mesh wifi system. Our is a 3-pack (3 Decos) which allows us to place them where it will provide the maximum wifi coverage. It has performed perfectly and the units are so small most people don't even know they are around.

Decided to upgrade my WiFi to a mesh system. These Deco units were very easy to setup and have worked flawlessly since I installed them about 3 weeks ago. WiFi doesn't drop out no matter where in the house one goes. Just make sure to locate each module within 40 feet of each other and then you should have success as well. Very happy with this purchase.

This replaced a nighthawk and netgear extenders. never received speed tests above 20. Now constantly over 100 anywhere in my home and yard.

Easy quick and efficient set up. After looking for other mesh system, I chose TP Link for the price and numbers of base ports. Couldn't have made a better choice. I have no regrets and I get over 110MPS speeds after getting 45 MPS before on my 2 story house and in the back and front yards.

I've had problems for years with coverage in the corners of my house. Extenders never fully solved the problem and were messy solutions. This mesh network solved the problem within minutes. It's expandable, so good to know that I can meet future needs as well.

I installed these in my lake home. I have improved range by the beach and my response rate is faster than the singular wireless router I rented from the internet company.

Reviewed by KkKk
Written by a samsclub.com customer.
Helpful?
Average Rating:(5.0)out of 5 stars49ratings, based on49reviews

My download for wifi was running around 15 MBPS before installing the Decos. Now it runs around 115 MBPS. Amazing performance! Easy set up. I did my research on the mesh devices and found this one to be the best bang for the buck! So true!

Reviewed by AlAl
Written by a samsclub.com customer.
Helpful?
Average Rating:(5.0)out of 5 stars49ratings, based on49reviews

I am not a technical type and considering the last extender I tried, I was really worried that this one would be equally difficult. However, it was breeze! it also works really well. No dead spots that I've noticed so far.

Who is sending out this junk?

Received from MDG SALES. The retail box was sliced up and held together with packing tape. It truly looked horrible. I ordered a new item, not a refurbished item. If it was a return - at least make it presentable. Never again!

Fast internet throughout the house

My family had been having issues with slow internet in the basement and areas on the send floor. After, installing the DECO M5 the internet speed allows for all of us to be streaming anywhere in the house.

Need some basic knowledge of technology to use

We are in our 70's, and non-techies. We just wanted to be able to pick up Wifi outside on our porch. Internet reviews said to get a mesh Wifi system, rather than a Wifi extender. This Deco system was one recommended by Consumer Reports, which added it was easy to set up. Unfortunately, it was too complex for us - needed to know Inernet connection type, which meant nothing to us. Insturctions said to contact Internet carrier, but getting info from CenturyLink was nigh impossible. Returned the Deco and bought a T-Link extender. Didn't need to know anything about the system. Just plug it in and push the WPS button on the router and the extender. Couldn't have been easier. The mesh system is likely a good system, but simple as the setup was supposed to be, it was still too complex for us.

Perfect for a non-technical person. I set this up and had all 3 running in about 15ish minutes. The wi-fi helped my Samsung smart tv immediately connect to the internet. I am very happy and I would recommend this product. One tip, you need to buy 3 ethernet cords to hook the stuff up.

This improved our range for our wireless in our home so well. Easy set up and it works great.

Reviewed by DmDm
Written by a samsclub.com customer.
Helpful?
Average Rating:(5.0)out of 5 stars49ratings, based on49reviews

I'm really glad I bought this!!! I can now use all my devices upstairs and downstairs. Everything loads quickly.

I bought this over a month ago, works great and easy to set up using the app. The signal strength and the amount of available channels.

Bought this to boost the WiFi in our house, greatly improved our WiFi reception, would definitely recommend & would buyagain!

System works fine.........until you have a power outage. Decos will not recover, wifi goes down and stays down. You have to be home to do a complete reset and redo configurations, on all 3 decos. If your away on vacation that means your home is without wifi, no cameras wll be working. Your home is left without protection.

Comment from department -
Hi, Thank you for your review. The Deco M5 shouldn't have any issues re-connecting once your Internet service is restored. However, please note that in in the case of a power outage, there may be a surge or other electrical anomaly that can potentially prevent a proper reboot of electronic devices. We always recommend ensuring your Deco system has the latest firmware installed, which can be done via the Deco app. Our Support Team is always happy to answer any questions you might have about our products. Please feel free to email USSupportTeam@TP-Link.com and we'll gladly have a Support Agent follow up with you directly. Thank you, TP-Link Support USSupportTeam@TP-Link.com
Average Rating:(5.0)out of 5 stars49ratings, based on49reviews

Working great so far. Much better than working with traditional range extenders.