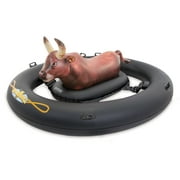 This is so much fun and worth the money. It's heavy plastic and is made to take the abuse of the ride. [This review was collected as part of a promotion.]

The grandkids had a blast with the inflatable bull! It was a hit at the pool party!

Kids will just easily stay on top of the bull, but adults will be a lot more challenging as the bull easily bucks you off. Bought for my kids originally, but adults I think have a lot more fun on it. Worth the money. It is huge. I love the outer safety ring around it to protect anyone who falls off from hurting yourself on the pool edges. Everyone who sees it says "this is the best thing ever."

Great challenge [This review was collected as part of a promotion.]

Very well constructed. Excellent valving system. The well thought out design allows kids and adults weighing up to (I'm guessing) about 140 - 150 pounds to hop right on the bull with no problem. I weigh 210 pounds, and so I had to be more aware of maintaining my center of gravity over the bull to get on. Learning the technique is hilarious. But back to the kids! The large outer ring has four handles that others can use to rotate and rock the bull in an attempt to unseat the kids. Make sure you have the kids raise one arm like a real bullrider! The pictures and videos are priceless!

Love it!! Lots of fun !! Good size !! Strong enough!! We have used once for a graduation party we will use it again !!

This has been the most fun pool toy ever. BUT. We've had it less than a month and the seem in the bulls neck has ripped. Never over the weight limit, never overinflated. Unfortunately because of the location of the rip, patches don't appear to be functional. The seam line is keeping the patch from properly securing, leaving space for air to continue to escape. Bought directly from Walmart for way less than the reseller pricing, but unfortunately, since they're out of stock I can't just exchange it for a new one. Pretty disappointed as this has been the "it" toy at our backyard pool. Hopefully I'll be able to finagle a repair on it, but pretty disappointing for a months worth of fun.

Terrible float! Cant even get on it.

A friend has one of these & it looked like so much fun. We needed a house warming gift for my brother's new pool. It was an immediate hit as soon as he inflated it. After 3 attempts of riding it, the bull part of the float started losing air. He pumped it up again & tried riding it a couple more times but discovered that there was a huge split in the side seam of the bull. The float was not abused or overly inflated or used improperly. There must be a defect in production. We are returning it for a refund - don't want to try another one at this time.

This is such a great pool toy! My guys especially like it but so do the girls. I highly recommend this!

I've been trying to inflate this crap for 3 days an air compressor. The inflator port is not made for any compressor

Kids aged 7 and 8 had some difficulty getting on the bull, but soon learned to keep their balance. I bought two of these, but it's pretty crowded when both are in my 14 X 28 foot pool. We're satisfied with the product.

Very strong made ,awesome fun for the family ,an really good price .

Gets too hot in the sun

The black float gets so hot in the sun it will burn your skin.