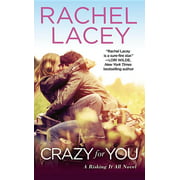 Risking It All: Crazy for You (Series #2) (Paperback)

Risking It All: Crazy for You (Series #2) (Paperback)

Title: Crazy For You Author: Rachel Lacey Publisher: Forever Series: Risking It All # 2 Reviewed By: Arlena Dean Rating: Five Review: "Crazy For You" by Rachel Lacey My Viewpoint.... This novel was the second in this series 'Risking It All' that featured Emma Rush and bad boy Ryan Blake ['had tattoos, a motorcycle, and enough round-round-the edges sexiness...'] that was simply one good read. I enjoyed it from the first page and yes it was quite a yummy one as this author can only give to her readers. We find that Emma and Ryan had always had that something for each other since childhood, especially Emma. We find Emma is wanting to shake things up in her boring life and who would she pick ...no other than Ryan...her longtime friend to help her do it. All I can say is wow, this will be one hot sexy read for their chemistry is off the chart. Now they were grown and the only thing that seemed to hold Ryan back was his promise he had made to his friend Derek [Emma's brother and his best friend] who had died while serving in Afghanistan that he 'would protect her [Emma] from everything --including himself.' Now, how was he able to get over this hurdle without jeopardizing a long time friendship? What will happen as Emma is wanting something more in her life and that would involve Ryan? Will Ryan be willing to give her what she wants? Will there be a time limit on this decision and will it work for them? To find out about it all you will have to pick up this good contemporary romance and see how well this author bring it all out to the reader. The characters were all well developed, portrayed and believable giving one a read that you will not want to put down until the end. To have friends like: Emma, Ryan, Ethan, Mark, Gabby, Carly Mandy, Trent and Jessica only will leave you saying wow what a bunch of friends I would like to have in my life. They were definitely their for each other! So, how will this turn out with feelings and futures are at stake...will these two finally see the light at the end of the tunnel? Well, you will just have to pick up 'Crazy For You' to see if these two get their HEA! Now, get ready for the next series...'Can't Forget You' that features...Mark and Jessica's story.

Rachel Lacey is one of...

Rachel Lacey is one of my favorite authors. Her writing style draws the reader deep into the story from the very beginning. Her characters are well developed & realistic. She manages to make her supporting characters feel as important as the main characters. Emma's girlfriends daring her to date outside of her box propelled her to asking Ryan to be her "fling". Ryan's loyalty to Emma's deceased brother was honorable if a bit misguided. It was fun to watch her stepping forward & him backing up when its usually the other way around. This can easily be read as a stand alone but you know you'll end up getting the others & reading them too!! This was a fun, flirty enjoyable romance & I can't wait for the next one!!

Wow, this book is H-O-T. Well the chemistry between Emma and Ryan is hot. It was building and building that if Emma did not make a more on Ryan soon I was going to (well in my head). It sure did not take Emma long to turn from the good, boring girl to the wild woman. Before Ryan; Emma was so boring that she was dumped (ouch). Ryan did hold up his end of the deal with Emma's late brother to watch over her. Although, I have to admit that if it was not for Ryan, Emma probably would have still been the good girl. Not that there is anything wrong with good girls as I am one. No matter where Ryan or Emma were, they could heat up a room. The other characters in this book were good. They did not have as strong of roles but they sure were not in the story for just fillers. The last third of the story is when things really got real. This is also when I saw the more emotional side of Ryan. Calling all romance fans, you have to check this book out.

3.5 starsI received this book for free in exchange for an honest review. This does not affect my opinion of the book or the content of my review.Emma is tired of being the good girl, she wants to take a walk on the wild side for once. When a dare has her flirting with a childhood friend, she may get more than she bargained for.Ryan has had a strict hands-off policy with his friend's little sister, especially after his friend died. When she kisses him though, a door he has tried to keep shut is flung wide open.Emma and Ryan are about to find out that being bad has never felt so good. Second in the Risking It All series, we find ourselves back in the small town of Haven. This time it is Emma and Ryan's turn for romance. Both characters are extremely likable. Emma is feeling lost in her life and wanting a change. She's always had a crush on her brother's friend Ryan but he only saw her as a kid. While it is brought up more than once, I thought a couple flashbacks to her and her brother could have added an emotional punch. We learn he died in Afghanistan and hear how Emma misses him, but I missed seeing their relationship. The same could be said about flashbacks showing Ryan and Emma's brother as friends. I'm glad it wasn't dwelled on too long about Ryan feeling guilty about dating his friend's sister, it would have felt like drawn out angst. The small town flavor that showed up in the first continues here with a circle of friends showcased that you know are just waiting in the wings for their own stories. The motorcycle rides Ryan takes Emma on also gave a great sense of scenery and location that helped place me in the story. Ryan's half-brother drama helped to give his character different layers but the brother's character never journeyed too far from young adult angst. In fact, while this was a nice, pretty calm story, excitement and wow factor are missing. In an over flush small town contemporary romance market, none of these character stand out, we've all read them before. While this is definitely comparable to a Jill Shalvis series, I would say the heat factor is ramped up a bit. Emma is looking to shake things up in her sex life and while they don't do anything considered left of center kinky, they do get it on, frequently. Ryan and Emma's chemistry and steam did a great job of providing some spark to the story. Unfortunately, the lack of excitement or differentness made this read more of the mundane variety for me. However, if you like small town stories, a nice main couple, and want more heat in your contemporaries without crossing over into erotica, you'll want to read this. The next in the series will feature a second chance romance where unresolved issues and a wounded warrior will be the stars.