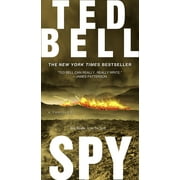 In this latest Alexand...

In this latest Alexander Hawke adventure (this is book four), our hero is sent on a recon mission into the Amazon jungle where suspected terrorists are actively training. Hawke is captured and tortured, only to be rescued by Harry Brock at the last minute. Hawke recovers and tells his government of the danger to the US, but they downplay the importance of Hawke's intel, not believing it's a serious as he states. Meanwhile, along the Texas/Mexico border, things are heating up. More border patrol officers are being shot at by increasingly well-armed border crossing Mexicans. A sheriff in a small town finds evidence of an even larger smuggling plot that eventually leads them to a large, coordinated terrorist attack on the president during his inauguration speech. Hawke goes back to the Amazon for revenge, accompanied by Stokely and Congreve (who is decrypting an important confession letter). Congreve is captured by Muhammad "Papa" Top, the same terrorist leader that tortured Hawke. Hawke and Stokely, with some help from a few Thunder and Lightning members, infiltrate Top's jungle stronghold to stop the invasion being coordinated from there and rescue Congreve. It's quite a thrilling book, with lots of action, and very difficult to put down. I have really enjoyed the Hawke books, and hope to see more in the future. Sniper, Hawke's parrot, only had one brief mention in this book, and I had hoped to hear more about her, but perhaps next time..

I really enjoyed this book.

This was a nice book to read. It was action packed and well written. While it is fiction, there are a number of facts that were well researched. Those facts helped me engage more with the story.

Non-stop action and (for once) plausible villains make for very good entertainment. This author never disappoints and deserves more appreciation from the political thriller fans.