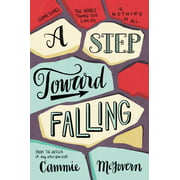 A Step Toward Falling (Paperback)

I wanted to read A Step Toward Falling because I was interested in the bullying of a girl with disabilities. I think that it is such an important subject, and even though Emily wasn't the one doing the bullying, the silence of Emily when she saw it is the big turning point of the story. She is sentenced with community service working with young adults with disabilities. The story is told in dual perspectives with Emily and Belinda, the said girl that was bullied. I am not sure that I have ever read such a perspective, but it felt well done. We can see the places where she is delayed or has problems and how the whole situation effected her. Emily is able to learn from the people in the relationship class that she is volunteering at. She also learns a lot about Lucas, the football player who also saw the situation and also did nothing as well as a returning volunteer. They both brought a lot to the story and saw things in completely different ways. In some ways Belinda is very mature, in others she is delayed. She is obsessed with Pride and Prejudice, the long version, as well as a football player who did a dance for the disabled. She thinks that means they are boyfriend and girlfriend, but of course, he was only there because of community service, so that led to very awkward situations. Emily learned so much from the class she is helping with, but she does come to the conclusion that although she is helping in some ways the students in the class, but she is doing nothing that actually helps Belinda who for most of the story isn't even going back to school. She remembers more of the incident at the football game, although she doesn't understand what all it means. I liked it when she finally started to do things to make up for what she did, and try to help Belinda heal, and for others to see her, and others with disabilities in a different way. The ending was nice, and wrapped things up. There was character development and an important message. Bottom Line: A look into teens who didn't do anything when they saw a girl with disabilities being bullied, and their character growth facing the consequences.

When a disabled girl i...

When a disabled girl is attacked under the bleachers at a football game, there were two students who witnessed it, and did not take effective action. As punishment, the school assigns them to do community service at a learning center for the disabled.

Review courtesy of Dark Faerie Tales Quick & Dirty: A thought provoking read. Opening Sentence: At our first meeting with the director of the Lifelong Learning Center, Lucas doesn't speak to me once. The Review: The story is told from three perspectives: Belinda; the disabled victim of a traumatic experience and Emily and Lucas; the two high school students who witnessed Belinda being assaulted yet did not call for help. Although they did not intend to leave Belinda helpless, neither were brave enough to cry out so in the end Belinda saved herself despite her disabilities. It was interesting to see how the incident affected all the parties, not just the victim. Both onlookers feel incredibly guilty for not stopping the awful act and come together through their community service, where they interact and help other people with disabilities. Essentially they want to help Belinda but is it too late? It was sad that neither Emily nor Lucas helped Belinda when she needed it the most, but it made me question what I would have done if I was in the same situation? Would I have frozen and been unable to help, or turned a blind eye in the hope that someone else would stop the assault? I really hope not but until you're in that situation you never know... I'm surprised at how I almost start to cry saying this. I don't know why, because the play is over and I don't need to be nervous anymore. I'm not sad about anything. I'm happy and I'm about to waltz dance with Anthony, but maybe happy is a little like sad because I do start to cry. The theme of this story is not just creating awareness of those with special needs and making people realise that there's more to them than speech or hearing impairment; it highlighted how deeply these people feel and they tend to be far more perceptive than we give them credit to be. A Step Toward Falling also explores the issue of stereotypes based on first appearances, when often the first judgment falls short of reality. This is explained by using Jane Austen's Pride and Prejudice as an example and I found it interesting to see how the issues in that story are prevalent in this day and age. "Why would I do that?" "To freak him out. Mess with his head. Those football guys and their cheerleaders have no capacity to deal with anyone outside their circle." Richard rolls his eyes. Even Barry has to say, "The thing is, Candace, sometimes you forget that other people are human beings." "Not everyone, Bear. Not everyone." In this book there are three main romantic 'pairings' and what I liked most was that although each couple is very different, the problems they face are all too similar. Belinda and Anthony both have disabilities but their dilemma of being afraid of commitment is something that Hugh and Richard, the gay couple, also face. It doesn't matter whether you're a high school quarterback or the victim of a sexual assault; the problems faced tend to be the same. What Lucas said in the lobby last night has stuck with me because he's right: Friendships are complicated. Friends have power. Friends can break your heart. A Step Toward Falling was based on an intense theme but there was plenty of humour to lighten the read. It's not something I would have normally picked up but I'm glad I did because the characters in this story will stay with me even after I've closed the book. Notable Scene: My mom says it's good I was born now not a long time ago because back then they didn't know what to do with people like me. I think she means people who believe in romance and love, because I do. [Belinda] FTC Advisory: HarperTeen provided me with a copy of A Step Toward Falling. No goody bags, sponsorships, "material connections," or bribes were exchanged for my review.