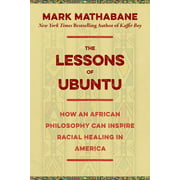 The Lessons of Ubuntu : How an African Philosophy Can Inspire Racial Healing in America (Hardcover)

The Lessons of Ubuntu : How an African Philosophy Can Inspire Racial Healing in America (Hardcover)

Mark Mathabane gives the reader a vivid account of being a black man in South Africa and America. Unfortunately, the experiences are much the same in both countries. This latest book by Mathabane describes what needs to be done to bring racial healing between blacks and whites. The first part of the book describes ten obstacles to racial healing. The second half of the book outlines the ten principles of Ubuntu, an African philosophy emphasizing the bond connecting all humanity. Mathabane recognizes that racial biases are held by both blacks and whites. Racial healing and peace requires practicing empathy, compromise, learning, nonviolence, change, forgiveness, restorative justice, love, spirituality, and hope. Mathabane provides examples of each of these principles put into practice. He explains what the Ubuntu principles are but does not provide a how-to guide to their implementation. His book does provide the inspiration to take action on closing the racial divide.