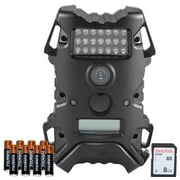 it takes nice photos of the game

For the price it's more than adequate

Best Camera for the money

Absolutely amazing camera. Ive had one for about 2 years and in the process of getting several more. They are inexpensive, easy mounting, small, batteries last forever and takes AA which is a plus. Best picture and video

Suspected we had rabbit in our yard. Purchased this bundle. Had my doubts. I am completely satisfied.

For those who love hunting!

Simply fulfilled my expectations and at a very good price

Great deal! We have land for hunting and purchased this deal, great for the cost considering you get the batteries And SIM card to come with it. Usually the game cameras are 40-50 or more alone. We ended up getting 4 of these. Easy to set and quality of pictures are always great. Set up date/time on camera and walk away. We have left in place for a few weeks and then switch out cards and look at pictures. Havent had any issues with rain,etc. pretty durable

Unfortunately the SD card that comes with it is the 8gb only, not sure why they can't correct that info. The trigger speed its more than a second delay and thus the video or image doesn't capture the animals unless they stay in front of the camera for longer than 30 seconds; so very disappointing. I had a cheaper camera (only 8 megapixels -Tasco) that I returned thinking this one was better and now I regret it, because that other one is no longer available. That cheap one would immediately record movement and I had many more pictures and videos of animals. My yard late at night is usually visited by lots of wildlife and so far in a 2 week period with this new camera I only captured a fox walking away at the very end of the frame. Also, somehow, I noticed that it doesn't stay on for long and I have to keep resetting to "power on" mode. SO it doesn't matter how clear is the resolution if it doesn't record and capture wildlife when it is suppose to. Very Very Very DISSAPOINTED. Waste of money. On the pictures the comparison of the two cameras-- Fox-- with this WILDGAME camera--Quality of resolution is much better but slow trigger capture wont record wildlife fast enough as it walks in front of camera. Bear- with Tasco camera- Fuzzier resolution but at least the trigger speed capture is faster and lets you record wildlife much better when it walks in front of the camera.

The 8 batteries included did not even last a week of use in a warm house on the 15 second video capture setting. Disappointed. Will return and get another brand.

You get what you pay for... hopefully

Bought this on Black Friday but waited to open it before Christmas. I have been using the camera for several weeks. The night vision is rather poor.. it over exposed too close and was dim at more distant range with focus only adequate at 15 feet. My most objection is the time delay between sensing movement and turning on the camera. I have many blank photos and videos because the animals were in range, ate the bait, and were gone before photography started. videos are 15 seconds. An example, a coyote walked directly towards the camera. The night video only captured 2 seconds as it walked under the camera. I paid$38 for the camera, I feel $28 would have been reasonable.

Great camera for the price

I bought this camera because of the price! So far its taken great daytime pics and videos arenât bad! Night time pics were a little blurry on a couple pics but for the price with sd card and batteries you canât beat it! I would recommend this Wildgame camera!

As it has been reported before the hardest part of setting up the camera is getting it out of the package. With a sharp box cutter and some care I was able to get it out. The camera itself is great! I have issues with the neighbors dogs that is why I bought the camera to bein with. So far I haven't caught anything on the camera other than the wind blowing tree branches around. So at least the motion sensor is sensitive enough to catch that.

great calm for the money

very good camera for the money. i have bought several cameras over the years ranging from $30 to $200. i would have to say from all of them i bought i like these the best. i liked them enough that i bought 4 more and I'm getting great pics and no false triggers. i have had them in the field for about a month and everything is going great. battery life is good. just a bit of advice go with the regular Energizer batteries. they seem to last the longest. i tried the lithium Energizer and the cold weather here in missouri zapped them dead in less than 10days in the field. also if you have allot of movement of animals i would suggest at least a 16gb sd card b.c. i filled up an 8gb sd card in three days where i hunt with deer Turkey and raccoons.

Not a good night camera

I had this camera up over my wife's deer feeder for 1 week. Deer visit every night, but in that 1 week, it only took 2 pictures of deer. It took 110 of me working in the backyard during the day. I'm going to search for a way to improve its night vision, but I'm not optimistic since the manual doesn't address it.

I was SO looking forward to using this game camera. My mom has had a bear in her yard at night and we wanted to see how big (and whether there might be cubs). We set this camera up as instructed, and left it overnight. Next morning we put the SD card into the computer to see the pics. The only photos it took were when we were mounting the camera to the tree, and then when we were taking the camera back down. We knew there had been activity in front of the camera well within the viewing distance during its time attached to the tree. So, we set up an experiment during the day. This time we put the camera in a common deer trail. We stood back and watched the deer cross in the path right in front of the camera, stop to eat and wander within 30 feet of the camera, during full daylight. After they meandered out of the path, we once again went to check the card, scaring one of the deer back in front of the path in the process. This time we had pictures of setting up the cam, one picture showing the rear end of the running deer in the far edge of a picture, and more pics of us taking down and shutting off the camera. It is of no use to us if it only occasionally takes photos, and only during swift and dramatic movement. So disappointing. It's going back. I really was hoping this would work. Also, the bungee cords are almost useless. They are so short they only fit around very small trees, such as fruit trees.

First thing is the packaging is like a bank vault. Took a knife and pliers to get the packaging open. Once in hand setup is straight forward and easy to use, comes with straps to attache to a tree or post. The line of sight distance in the dark is about 30 feet, anything over that is kinda out of site. We have only used the video and not the still so our review is limited to that. First time use was surprising to us as we had way more deer and bucks then we had ever seen at our feeder.

Good for the money

Just put up the camera yesterday. Easy install, but extremely difficult to remove the items from the packaging. I am still trying to understand the video option. The 10 second clip shows no movement. The price was great. Image quality is good, Range is good and it look like it will work well.

Doesn't allow much user input. Has set video length and picture settings. Simple to program and use but if you are looking for features I suggest looking elsewhere. I ordered four of these and one was defective.

Camera did not take pics. All came out solid white. Left one voice mail and two emails to the manufacture, no response. I will buy another brand. This one had 4 stars, how I don't know.