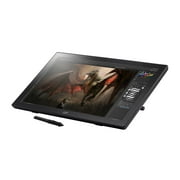 The drivers that are provided my Monoprice just don't cut it. The Tablet lags. other then that, it's beautiful. Love the how screen looks and feels! I would recommend installing different drivers from another tablet company however, how you'll be extremely disappointing by the amount of Lag. Plus, love the Pen!!! no having to worry about recharging the unit or batteries is awesome. Great price and Unit :) Also, INSTALL THE DRIVERS FIRST! then connect the tablet, or your computer will be all sorts of confused!