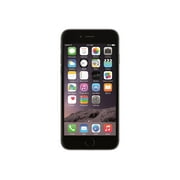 deciding if the 6 or 6s is the most difficult part. the 6 w/128gb is the one for me. lots of room for pix or music and even video. could not be happier with this refurbished iphone. i had previously purchased the 5s also refurbished. never going to buy new again. every time a new iphone comes out the refurbished ones get better in price...

I love it!!! Not a single scratch, looks and works perfectly!!!!

I would recommend the iPhone 6

The iPhone six has offered many improvements since the last generation of iPhones. I have owned an iPhone 6 for roughly a year, and you will be thoroughly impressed with the way Apple has improved the features rather than just solely introducing new features. The first feature that will catch your eye is the fingerprint scanner in the home button. The way Apple has seemingly perfected this feature will make you never want to give it up, because of how convenient it is. The second improvement is the larger screen and a sleek thinning design. Although the increase of screen size creates somewhat of an inconvenience in storage it makes your streaming, gaming or typing much easier. If you game you will enjoy the extra space on the screen when using a d-pad. There has also been a pretty substantial improvement to the battery life of the iPhone 6 model compared to the earlier iPhone 5 models. You are able to talk on the phone for four to six more hours depending on the model of iPhone 5 you are comparing to. Also, you will be able to enjoy nearly ten extra hours of audio playback. The iPhone 6 is much more reliable compared to that of my previous iPhone 5s. The amount of crashes has been pretty minimal in comparison. After a year of use I can count the amount of crashes on one hand. The lack of crashes will make the use of the iPhone 6 less stressful for you in comparison to earlier models. The last improvement we are going to discuss, and one of the main selling points for all iPhones, is the camera quality. I am not a very frequent picture taker, but there has been a good improvement to the quality due to the improvement to stabilization. Overall the iPhone 6 has many improvements that are a big step in the right direction for Apple. The list of improvements to the iPhone 6 is pretty long, but the battery life, reliability and fingerprint scanner will have you loving the iPhone 6. I would recommend the iPhone 6 if you are looking for a user-friendly phone, love high quality pictures, or are a fan of Apple products.

The product is good, but it got all scratched up looking very used

I phone 6 - dented and marked

The phone arrived quickly which was great but when I opened the box the I-phone 6 had a dent in the cover and black marks all over it. I wanted to return the phone but I didn't want to go without a phone until it got resolved.

charger is not from apple and when charging phone heated up and silent mode button not working properly ,suddenly switching off,it wasted my time

Not a refurbished - This is a used phone.

Listen, DO NOT-I repeat do not buy this phone. I got this phone ship to me today from Walmart. com, I will return this phone today. Phone was all damaged on all corners. There is no doubt that this iphone was a used phone for at least 2 years, then Walmart just sell it for as refurbished. There was no earpiece, and the charger was not Apple charger. VERY DISAPPOINTED.

Warning: DO NOT PURCHASE ANYTHING FROM ALPHA ELECTRONIC AND TOYS!! I purchased an iPhone six from this company and it was bad from moment number one. I brought the phone into my nearest AT&T Store and they put the phone on a battery meter which showed that the battery life was 77% used. It showed in the "Bad" range on their meter. I took a screenshot of this and sent it to Alpha. They refused to refund my money for the iPhone and simply stated this is normal for a refurbished iPhone, they did not even bother to sign it or apologize for any inconvenience. To this day I have no idea who I was talking to on the other end and they were very slow to respond as well I had to continue emailing to get any response at all. Again, do not purchase anything from Alpha Electronic and Toys.

Packing is very worse and I think this is not an refurbished phone and it looks like used phone for many years. There is no original charger. It looks like the whole pack is fake. Returning the phone right away. I went to walmart for return this item and they didn't accept this product to return. Really fed up with this phone. I don't recommend this phone.

It's a good phone

This phone was never able to be connected on any network. I only can use it as an ipod. I attempted to get a refund or exchange but was told i dont jave any warranty. I thought i had a 1yr warranty automatically.

The phone want even except calls bought min in saying no connection ,it was a waste of money the key pad sticks in everything

Love this phone. Received it sooner than expected.Looked brand new when I opened it up. Only trouble I had was getting it updated and getting on WiFi. Both of which was my internet connection. If ever I need a another phone I most definitely would buy from them again.

Do not waste your money!

I purchased this phone a few weeks before Christmas and it is not less than two months later and this phone broke down completely it started with a weird glitch and finally just shut down. Now I have a black screen will never again will I purchase a refurbished iphone!

Shipping was fast but the phone came defective with 2 black spots on the screen.

Ordered 3 of these devices over a 1 week period. Had to put new batteries in 2 of them. Not sure what this vendors definition of "refurbished" is. Other than that annoyance, they were in great shape.

I love it just have to figure out how to get it to take my sim card or read it it just says searching it's new and looks great keeps good charge works perfect other than getting sim card to read and make calls and txt.