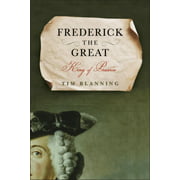 Frederick the Great : King of Prussia

Frederick the Great King of Prussia by Tim Blanning is a stunning book. Blanning , a professor of mine when I was at Cambridge, has given us the definitive biography of Frederick the Great. I think of Nancy Mitford's biography but I find this one more substantial. For a student of German history this is a must.

Frederick the Great King of Prussia, by Tim Blanning (read 10 Aug 2016) Even though I read on 15 May 1972 Ludwig Reimers' biograph of Frederick the Great and on 4 June 1987 I read Robert B. Asprey's biography of him, I hve now read this 2016 biography by a Cambridge historian. Blanning spends a lot more time on Frederick's probable homosexuality than did the othe two biographies I read, but he also covers the life and Frederick's exploits in full. Some of the accoun is pretty dry, but the account of account of the Seven Years war is well done. The book has 105 pages of notes and six pages of a list for "Further Reading" (though neither of the old biographies I have read is suggested as uther reading. The book did not make me admratory of Frederick--in fact some of what Frederick thought and di suggested why Hitler admired him, his anti-Semitism, his animus against religion, etc.

The iconic biography i...

The iconic biography in English it may be, but so much less engaging than his excellent books on Glory and on Music. This took months to read and I was really grateful for the 160 pages of notes as they suddenly ended the tome. I read it all because it was so expensive to purchase. The maps are execrable. You need your own. Not a nice person. Enlightened autocracy is shown to be overrated.