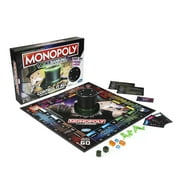 Great Game! My grandson loves Monopoly. This is a fun new spin on the old classic. Electronic Bank does all the work and it makes put away time much easier.

My mother is hearing and visually impaired Monopoly has always been one of her favourite games. And with the voice banking she was able to play again.

I received Monopoly Voice Banking for free as a part of a promotion from Hasbro, and wanted to leave a review. I see why they would replace the money with the electronic tracking as it makes things easier for the players and avoids cheaters. I wish the game was also more than 4 players but I understand why they made that move. It was fun and easy to play with the kids.

We enjoy playing this monopoly quick and fun

I was blown away with this game. It's actually an electronic banker. My kids and I just love it.

I love it it is more fun the new way

This game is awesome

I got thus game for my kids and us to play on game day during the week. This game let's you play monopoly in half the time. Also making the money all electronic was a really good idea. This version of my favorite game is now my kids favorite game ever. [This review was collected as part of a promotion.]

Water damage to the Monoply board games

All three of the games were water damaged. The box it came was damaged. The games were intended as gifts... The intention here is to report that the package and its contents were damaged and look battered. I am stuck, the games work... but look awful. I would not want to put that damage on my shelf and would be embarrassed to pull this game out and share with friends and family. Attaching 2 images.

I received Monopoly Voice Banking for free as part of a promotion and decided to leave a review to help prospective buyers. I really enjoyed this new modern version of monopoly, having an almost AI banker was very neat and the sound effects are fun and really add to the gameplay without being too loud or jarring. The instructions are easy enough to learn and even a child would be able to grasp it. There are some new mechanics to the gameplay which add much needed surprises to the game. I do wish you could have more than 4 players but with the board setup being what is it, it makes sense that only 4 would be able to play without too much trouble. All in all a very fun new game and will highly recommend to my fellow board game lovers!

Fun twist on an old game!

I received Monopoly voice banking for free as part of a promotion from Hasbro and wanted to leave a review. Such a fun game with a different twist on the old traditional monopoly. The voice banking is entertaining and you do have to think a little bit to keep up with what is going on which is a great part of the game. The only thing I would suggest Hasbro do is put a volume button on the banking unit to make it a little louder. The electronic hat is a very neat addition to the game.

voice banking and other tips

voice banking monopoly is a twist to the original monopoly. 1. the board is smaller. each property is now only 2 blocks instead of the traditional 3, and the few exceptions of the 2. also, no railroad property, just take a free ride to wherever it says. 2. the swap properties is a cool twist as well 3. buying a hotel or house is faster and you can buy only 1 or the other per property so example, indiana gets a house but later you want a hotel on indiana, no can do. 4. the voice commands are not 100% perfect. though 90% it does what I ask. also, read how to do the voice commands, and practice with it. some you say the entire phrase when you press your button, and others you say "buy", then wait for it to chime, then say "indiana". there is a cheat sheet you get so you dont have to remember the phrases. 5. I think you need a little patience with the voice banking because I had issues the first time and was going to return it the next day. I have since given it a 2nd shot and I'm proud to say the error was me not reading the instructions for the voice correctly lol. the game can be played in under 1 hr 20 min if everyone understand the game and how it all works. otherwise first time may be a little longer.

A great introduction to the classic game for young

I received this game from hasbro for review, and found it to be a interesting upgrade on the classic. The voice recognition hardware, shaped like Mr. Monopoly's hat, is really simple to use, and frankly, its quite successful in recognising commands from different voices and accents, across different age ranges even. The narration is quite clever and easy to understand (you can ask for repeats if necessary), even reading the community chest and chance cards to quite humorous effects. The rules are simplified, and the accounting is performed by the hardware, so it makes it easier on younger players to keep tabs on their investments, and because its all "public record" makes it almost impossible to cheat at the game. Also, the game tracks bankruptcy for all players and once someone goes bankrupt, the game tallies everybody's cash and declares a winner, making the games shorter and ending that annoying myth of never ending monopoly games. the aesthetic is a modern more "digital" take on the classic, with very fun pawns with clever names and sculpts (love that top hat wearing T-Rex!), but the green and magenta hues on the board are a little cold and not reminiscent enough of the classic colourful design that we all know and love. This is certainly a sound purchase for people with younger players eager to engage with the classic, but without dealing with the hassles of houses, and paper money, which are all tracked by Mr. Monopoly's hat hardware, I think its worth saying that its great for English learners too, as the clear voice of Mr. Monopoly is easy to understand, and even repeats on command without any problems. Its also surprisingly flexible on accents. Although I miss the metal tokens and colourful board, this game will see a lot of table in my house, as my nephews appreciated the little downtime and fun narration, If you want to try monopoly with younger audiences, this is a solid buy.

It was a fun game. I like the fact that we didn't have to deal with the money and mixing it up with the other players.It doesn't last as long as the other version. This way my kid don't get bored in the middle of the game. [This review was collected as part of a promotion.]

I received a free sample of the product to try from Hasbro, but this review is my idea. We are HUGE Monopoly fans in our house. This is a completely new way of playing the game. Do not have the mess of the money or the cards. It's a faster pace game, but it's a change. Love the change. The colors are a change. The talking hat is a brilliant idea. This really is a great game for anyone who loves Monopoly. Not as long as a normal game which is a plus. Definitely a keeper. Would recommend to anyone.

This is one of the coolest versions of monopoly I have seen yet in a long time. My sons favorite thing about it was the talking voice activity that and how you don't have all the cards anymore. You can do the same thing with the hat . The new player pieces are really cool as well. [This review was collected as part of a promotion.]

This has been so much fun for our family!

Monopoly--its a game you either love or hate. It often causes drama between players, accusations of cheating and just lasts too long! (At least that is my own personal experience with the game!) Until now. Monopoly Voice Banking has changed a few factors in play. First, games do not go on forever. With no money to count there is less cheating occurrences.

The Monopoly Voice Hat goes into the center of the game. The basic rules are similar. Except the hat dictates and keeps track of money for you--it will even give out punishments and/or bonuses at random. This helps to keep certain players from dominating. My kids had never played a full, real game of Monopoly. As an introduction this game is perfect! It is similar to having an Alexa or Google Home in the middle of the game! Perfect for our kids who are already into electronics and voice activated devices.

Some positives: no money to count. You can purchase hotels immediately. The Voice activated Hat makes the game funny and interactive.

That being said, this is a voice activated game and with that comes a few issues (although we found them to be minor). The Hat did not always understand what we were saying. One time the Hat was inaccurate with a property owned. But overall, it makes the game fun and I found it simple to teach my kids the basics of the game.

You do have to inform the Hat when you pass GO--its not an automatic collect $200 unless you inform the Hat. This game only allows 4 players at one time.

I think this game is a fun addition to any family's game night. I recommend the Monopoly Voice Activated game for families (especially families of 4 since it only allows four players!). [This review was collected as part of a promotion.]

fun way to play a classic game, but so much easier

We were given this game for free by Hasbro, but it was our idea to post this review. Wonderful way to play this classic game! We love that the voice banker keeps track of your money, trades, properties....everything! Responds well to everything we said. Now are younger kids have an easier time playing because the don't have to count as much. Super easy clean up, no crazy money and cards to put away! The game does move a little faster too. Overall fun way to play! great for family game night!

A great game for the whole family

I received my Monopoly for free from Hasbro, and decided to leave a review. We had a fun time playing this version, my kids loved it and played it around four times the first day we received it. They have been playing it almost daily. I did find the hat being very sensitive to noise so when making a request at times it would cancel or not recognize what you were asking it to do but you once we figured that out we were good. I would highly recommend it and look forward to many more games.