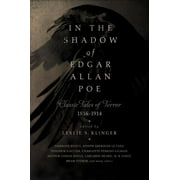 Review copy Leslie S. Klinger is considered to be one of the world's foremost authorities on both Sherlock Holmes and Dracula. He is the editor of The New Annotated Sherlock Holmes, winner of the Edgar Award for Best Critical/Biographical Work and nominated for every other major award in the mystery genre. He is also the editor of The New Annotated Dracula which possesses a similar in-depth examination of Bram Stoker's haunting classic and its historical context. In the Shadow of Edgar Allan Poe: Classic Tales of Horror, 1816-1914 Leslie presents twenty tales of horror from a diverse group of Edgar Allan Poe's contemporaries. From Ernst T. W. Hoffmann, who wrote The Nutcracker and the Mouse King which became the basis for Tschaikovsky's ballet The Nutcracker, to Bram Stoker who gave us the iconic Dracula. While a few of the names in this collection were already familiar to me, Arthur Conan Doyle, Ambrose Bierce, and of course, Bram Stoker, the vast majority of the names and stories were new to me. Although the reading was not always easy, I find the way people spoke more than a century ago to be a bit off-putting at times. The stories themselves were as varied as their authors, with a strong showing for ghost stories. Some of the best ghost stories I've ever read are included in this volume. Among those tales are THE UPPER BERTH by F. Marion Crawford, written 130-years ago and as effective as any story I'm likely to read this year. Also in that category was A NIGHT OF HORROR by Dick Donovan and THE WOMAN WITH THE HOOD by L.T. Meade. Of course there are more than ghost stories in this collection, just as Edgar Allan Poe was more than a horror writer, Leslie S. Klinger has collected a wide range of tales for this book. Mysteries, Mummies, tales of courage and revenge, of prejudice and even a companion piece to THE KING IN YELLOW by Robert W. Chambers, called THE YELLOW SIGN. Dare I say there is something for everyone. If you can get past the old-time writing style, I think you're likely to find some reading to keep you up at night in the pages of In the Shadow of Edgar Allan Poe: Classic Tales of Horror, 1816-1914. Available in a wide variety of formats, In the Shadow of Edgar Allan Poe: Classic Tales of Horror, 1816-1914, is published by Pegasus Books. Recommended.