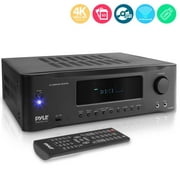 My display is not dim. This receiver works great.

I had to return this unit because the display was too dim. (Way too dim) I could not see anything on the display from 8 ft away on my couch. Trying to operate it was like being blind. Other than the display, this was really a good unit, So I still give it a four star (a minus one star for the display). Great sound, individual speaker volume controls on the remote. (I have never seen individual speaker volume controls on the remote and my old Kenwood did not have that either and it was really nice to have) Bass and treble on the remote. Bluetooth worked well. I bought a Sony 7 channel after this unit at Best Buy for about twice as much money and I had to return that also because it was very user unfriendly and was not compatible with my subwoofer which uses the wires and no preamp. Many of these units come wired up for a preamp nowadays but this Pyle can be used without a subwoofer preamp, which is really nice, because my subwoofer sounds great (I want to keep it) and it's wired into the wall. Another comment I have about this unit is that I'm not sure about the ARC HDMI connection. My newer TV has one but I was not able to get it to work with the Pyle, where as with the Sony unit, it kind of worked okay. The old optical connection worked fine, and the only drawback was that I had to control the TV and surround sound volumes independently. There are other differences also I'm sure but sound quality does not seem to be one of them. If you use the optical connection be sure to insert it the correct way. I had mine in there and it wasn't working and it was because I put it in there wrong which was very easy to do on this model. If you get a bad sound out of it try flipping it over and it might be harder to insert but that's what I had to do. It's still clicks in once you push on it hard. I'm hoping Pyle customer support will tell me if I had a defective unit for the display or not because I will reorder this unit if they tell me that I had a bad one. I cannot find anything else on the market yet for any price that works as well as this one does for my particular situation.

Decent unit. The LCD display is dim/could be brighter. Its performance is very good. Bluetooth range is strong, which is the main reason I bought this unit, so I could control audio in the houe from upstairs/without having to physically go to the unit/turn knobs. One unexpected bonus is the discovery of the “reset” button on the remote, which I used to unpair my dead phone so that I could connect the new phone/there was no other way to unpair the old phone, so that was awesome. If the unit could've been powered off (rather than merely being put in standby mode) by the remote, that would've earned a 5 star review.

So far I am not impressed, as I read before purchase the display is incredibly dim, I wasn't to concerned with this since I doubted the controls on the unit would be used, mostly remote. I cannot get it to work as a pass through so that I do not have to turn it on in order to watch regular TV without Surround. So far I it has not put out a true 5.1 or 5.2 Surround Sound, only Pro-logic which is a serious downgrade when watching feature Blue Ray Disks. The instructions and or an ability to research the Pyle Website is frankly pathetic, because of this the learning curve is only dealt with by trial and error playing around with the system, this is not how one should have to educate themselves with a new piece of equipment.

Good sound if you can put up with the controls

I hooked this receiver up to my old Sony speakers and the sound was good. However, there is no code available (i contacted Pyle) to allow the receiver to be controlled by a Comcast Xfinity remote. Also, every time you turn the receiver on (from "standby") using the remote, you must resellect the input (in my case, optical audio) by scrolling through many options. The panel on the receiver is so dim, it is difficult to read even in a darkened room. I then tried to use ARC, by feeding the signal from my set top through the receiver via HDMI and then to the TV (HDMI ARC OUT). While i had a TV picture, the only sound was static noise. I have not tried Bluetooth or any other input. Strange that it remembers the volume level but not the input.

Will not feed active subwoofer, will not accept signal from television from either HDMI or optical cable, power light is so bright we had to cover it, and display is so dim you have to be right in front of it to read it. The Pyle website has no troubleshooting information, and the online tech support leaves much to be desired - now they expect me to purchase another active subwoofer to test the receiver, even though I have told them twice that other devices will feed a signal to it. They have ignored the notification of the television audio feed. A few more days of this nonsense and it is going back to the vendor.

The sound was great. But the item was no good. Kept on getting a green screen when watching a movie. The product is no good.