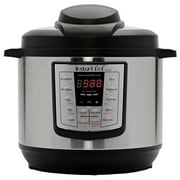 One of the best purchases I've made in years!

What can I say about Instant Pot that you haven't seen on a million other sites? This thing is a game changer! I know it may seem podunk, but sauteing or searing things in the pot before adding whatever liquid you will be cooking in along with other ingredients and then pressure cooking them to perfection seems really cool and works great! We have had this for a while now and use it multiple times a week. When we were thinking about getting it I was worried that it was only going to be a soup making machine but believe me, it is so much more. Some of the things, besides soup, that we regularly make in this is meatloaf, chicken wings, sausage, rice, and ribs! Yes, you read that right, we make BBQ ribs in this and they are without a doubt the best darn ribs I have ever had and I've made them for years on the grill! Pressure cook those bad boys with a can or bottle of quality beer and spices until almost done and finish them off either in the oven or on the grill with sauce and you'll never want them any other way! Fall off the bone tender and the pressure drives the flavors into each bite of the meat! And making rice is now fool proof, add equal amounts of rice and water/stock, slap on the lid, hit the rice button and 12 minutes later you have perfect fluffy rice! And with millions of recipes online for everything from Zuppa soup to sweet tea to corned beef brisket, you'll never run out of uses for it! And it is built like a tank with a ton of safety features so no worries of it exploding like a bomb in your kitchen. There are 2 types of people out there: those that have never used an Instant Pot and those that can't stop raving about them. Make the jump to the raving side and you won't be sorry! At 8 QT this is big enough to make dinner for 6 to 8 people or to make large batches of something so you can freeze it for a quick to reheat meal. You can't go wrong with this thing, why haven't you bought it yet? Get going before it sells out!

We needed a rice cooker and heard this works for rice. Well, it's so much more! We cook beans, rice, soups, chili, stew and the food is always great! No doubt the cook always deserves at least half the credit; but this is a great tool in the kitchen. No sooner do we put it away then it's back out on the counter.

Reviewed by LauraLaura
Written by a Instant Brands customer.
Helpful?
Comment from department -
Thank you for your feedback, Laura. It definitely sounds as though you should leave it on the counter considering how much you are using and enjoying your Instant Pot!
Average Rating:(5.0)out of 5 stars221ratings, based on221reviews

I wish I bought sooner

Best Buy ever! Great for busy days, like when I forget to thaw something out. Or when I'm in a hurry. Everything cooks great! Spaghetti noodles are ready in no time!

I would recommend instant pot to all my friends.

The customer service was great! When my old instant pot had short circuit problem, instant pot sent me a brand new one. It is even bigger than the old one. I love it.

I would recommend this to anyone

Easy to use, easy to clean, food tastes wonderful!

I purchased 3 on a black Friday deal and gifted one to a co-worker.

After she using it 3 times she noticed rust was forming under the the rubber seal.

She removed the rubber seal after each use to clean it properly.

Purchased it.. a part broke off so I contacted warranty which was supposed to send me out a new one.. never sent it out and stopped answering my emails: this company is a joke

Reviewed by KendraKendra
Written by a Instant Brands customer.
Helpful?
Comment from department -
Thank you for your feedback, Kendra. We apologize for the amount of time it has taken us to correct this for you. To make this right, we can see an upgraded Instant Pot was delivered to your address today. Please do not hesitate to reach out if you have any questions or comments about your new Instant Pot, or any of our other products. We want you to be pleased with your purchase and are always standing by to assist!
Average Rating:(5.0)out of 5 stars221ratings, based on221reviews

Very cool kitchen addition. One pot cooking made easy for me, a novice!

It's my go to dinner pot!

I would definitely buy this again

My first Instant Pot was a different model that did not have a manual button and it was only a 6-quart. All the recipes I was selecting talked about setting the Instant Pot on manual for a period of time. I purchased this one specifically for the manual button and it works great!!! Love the extra capacity. I've made several Instant Pot recipes and they have all turned out absolutely delicious from the Turkey Chili to the meatballs.

Reviewed by CatherineCatherine
Written by a Instant Brands customer.
Helpful?
Comment from department -
Hi Catherine, We are happy to hear that you are loving your Lux 6-in-1 (8 Quart). The manual button on other models was renamed Pressure Cook, they are the same function and are interchangeable for recipes. Chris W,
Average Rating:(5.0)out of 5 stars221ratings, based on221reviews

Yes I would buy another instant pot

I love my instant pot. There are so many things I have cooked already. Soups ,Stew, Chilies. All things that take a while. Not any more. My two friends purchased one after I shared my experience with it and they both have one now! We are all very happy with our purchases. Getting ready to make lentil chili right now. 10 min. Boom your done !

I love my instantpot. I bragged on all the stuff I could make during the holiday to all my family.

Okay so this is life changing. Meals can be done in record time. you forgot to pull food out of the freezer, no problem! Cooking frozen items isn't a problem. Now, there is a definite learning curve and online helpful hints and videos will help anyone use this beast. Honestly, if this broke today, I'd replace it in about 5 minutes without even thinking of it. Even my husband can use it. The size is great. I got a larger size because I'm a family of 5. I also wanted to make a full rack of ribs so a larger pot was needed to cook that.

I would buy this product again and again.

I love love love my Instant Pot! I use it almost daily. I enjoy the ease of use. The fact that I can cook food without defrosting with amazing taste and texture is a real plus. The customer service is first rate. I highly recommend this product.

I would buy this product again.

I received a defective Instant Pot for Christmas. Customer service, though not overly fast, were very good about the situation and replaced the item. I love the Instant Pot and wish I would have had one a long time ago.