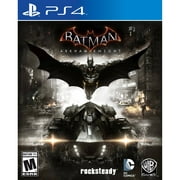 This game has great graphics, awesome storyline and excitement. You will love play this game to never put the controller down.

The storyline is good and there also a lot of side mission too.. I enjoy playing this game.. I recommend people to buy this game..

My son loves this game!

It was a good price. My son loves this game.

Loved this game. (No spoilers included in this review) The plot is solid in this one, with at least 12 hours of straight through gameplay. Plenty of side missions to keep you busy with the Riddler, Two Face, Penguin, Harley Quinn, Man Bat, Main Antagonist ScareCrow, and the newest being the Arkham Knight. There's no running back and forth to the bat cave a million times and there are three rather large islands to explore as well. The controls are good the graphics are excellent, and the cinematics are pretty awesome. But rated M for Mature, I wouldn't recommend this title for kids because of the violence and it gets a little dark in the story line. Overall, definitely worth it!

Great Game from a new gamer!

Please accept the source, a 56 year old new gamer! I love this game! So many different ways to play! All of the add on items that came with it, dated to possibly expire in 2015 still were available in April of 2016. I got them all! Awesome Batmobile! Drive it and watch out! The rules of the road are not the same for this monster machine!

This is a good game to get

I bought this for my boyfriend for Christmas. He loves the game and I loved how fast this shipped here.

Came brand new and on time.

full of action and you even get to drive the Bat mobile. (smile)

It was really good action, and good missions to play

Bought this for my son in law for Christmas. Cant wait to see his reaction!

Good for my children..they are older.

This is one of best game of ps4, but the box came broken in the corner...

My husband really enjoys playing the game! Graphics are awesome

Its great, my friends and I play together from our own homes.

Ok but my least favorite of the series. 3.5 stars

This review is for the PS4 version This is one of those games that sort of slipped past me as I had previously enjoyed playing both Arkham City and Arkham Asylum on the PS3. I guess I must have missed it when I transitioned over the PS4, so when I saw this for less than 20 bucks over the holidays, I grabbed it. For the most part, this game brings most of the fun things that made the previous two games fun, along with some new stuff, such as the batmobile, to add to the fun and excitement of the game. Arkham Knight has a bigger open world to explore with some good graphics and detailed areas of Gotham. The same dark atmosphere is appropriately done here as well along with the voice acting. Although it has taken me some time to get use to the game controls again, mainly because it has been a long time since I have played the other Batman games, for the most part, the game play is fairly smooth with some cool new fighting moves. The Bat-mobile adds a new element, which is fun, but I do feel that the game controls could be a bit better organized and less complicated as I always seems to struggle with it in combat. I have sort of a love/hate relationship with the Bat-mobile. There are new riddler puzzles that include some race courses for the Bat-mobile, which to me seem a bit out of place for the game and get a bit tiresome. There are lots of things to see and do, but as compared to some of the newer games out there, I felt a bit lost at times though as the search for quests isn't as neatly done as some of the games that have come out since this one. With that being said, I probably like this installment, the least of the three games. Not because I don't think it is fun, but because it has some elements that could have been done better, especially the bat-mobile and it does feel a bit more of the same in a lot of respects and gets repetitive pretty quickly. 3.5 stars