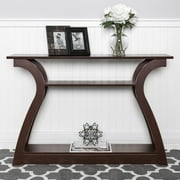 Exactly as pictured. Sturdy and not difficult to assemble. Only one thing the stickers are not ready to remove but goo gone and a razor did the trick. I would buy again.

I really like my table,, I enjoyed putting it together even more,, it was everything I imagined it to be!!!

Great buy. Easy to assemble and did not come damaged. Very quick delivery and goes nice with decor. Would highly recommend.

I liked the color and the style

My 13 year old grandson put this together for me. Beautiful table.

I wanted a console table in order to add substance to an accent wall in my kitchen. I have brown oriental flowerpot stands and needed a brown table. I used furniture polish to shine the table and it is now a perfect match to the stands. I am very happy with the console table.

Fairly easy to put together and is sturdy. The only problem is getting the number stickers off the pieces to help put together. Is very nice looking. Good looking sofa table.

I like the construction and material along with the look of this table. Gives a nice touch to our entryway. Also priced reasonably. I'd recommend it.

Terrific! Shorted some hardware though.

Very attractive. Perfect for what I need it for. I didn't give it a five star rating because I was shorted 3 of the round metal locking pieces. Otherwise, it is a definite 5.

This is a beautiful accent to our entryway. It looks great and was a tremendous value. Happy I purchased it.

Its made of poor quality not worth purchasing looks chinsy cheap

This is really nice but it came super scratched on the brown paint. Was gonna return it but my hubby said we can go to Home Depot and get something to cover it

Nice, but better if I had been given the sale price

I immediately went to the site when I was notified that it was on sale, but was informed that it was out of stock. Within two weeks it was back in stock, but no longer on sale, and since I had already shown it to my fiancee, I was "encouraged" to purchase it. It was a little more complicated in the assembly than I thought it would be, and it was nice, but not Wow. I think that had I received the sale price, I would have given 4 stars.

Great for the money and look great

Nice piece of furniture..i brought for my mom she love it.. number stickers are hard to come off use a damp towel come right off

This table is very nice, just what I wanted, but removing the stickers with the numbers for the pieces was a nightmare.

Easy to assemble. I love the style!

looks great and easy to put together

Pretty simple to put together-looks great. wish it was a bit more sturdy but that could be my skills on -putting it together.