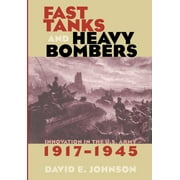 The First World War abruptly propelled the US Army into the 20th Century. One of the main questions was how to deal with new technologies, mainly tanks and aircraft. More specifically, the Army faced the question whether to integrate these weapons within the traditional structure, or to develop a dedicated around these technologies. The book describes these struggles and how finally both technologies acquired a certain autonomy. During these discussions, the doctrine for use of tanks and aircraft were developed, which in turn determined the kind of hardware that was produced: relatively light exploitation tanks and heavy self defending bombers. When the test of battle came, neither of these concepts worked exactly as advertised, and tactics had to be adapted to compensate for the shortcomings of the weapons themselves. The author deals mainly with organisational matters, ie how aircraft and tanks fit in the general scheme of the army, and the theories of their use. It is not a history of tank and aircraft units, nor of the technology itself. Although there is plenty of analysis, it is also, in the words of a reviewer 'densely factual'. This means that there a lot of who did what when, which can make it heavy going at times.