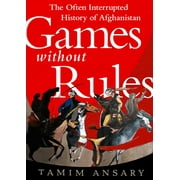 Games Without Rules: The Often-Interrupted History of Afghanistan (Audiobook)

This is a book which could only be written by someone with a foot in both camps. Tamim Ansary is an Afghan who has spent many years living in America. He produces an excellent book which neither denigrates one, or the other culture and provides an insight to Westerners as to the mindset of the Afghan people. Mr. Ansary is a realist but, quietly confident that, left to her own devices, Afghanistan will develop into a modern country. This, of course, leads to interesting questions: is it acceptable to stand aside and watch women being exploited because it is for a country to progress at its own speed? Strangely, this seems to be considered permissible but, when South Africa held a racist position, liberal voices did not suggest that we should allow them to come to terms with their racial mix at their own speed. There is a fine line between interfering within another country's affairs, and accepting intolerable behaviour. This book explains what any rational person must know: that the ordinary Afghan is not a ranting, gun toting thug, desperate to kill the infidels. The most important point of which it reminds us, is one that journalistic shorthand so often leads us to forget - namely, that the Taliban is not a highly organised single military unit, but a term used to cover everyone who stands against the country's government and which ever major power is poking their nose in at the moment. The reasons for dissent may be as varied as the uneducated country folk fearing that the 'sophisticated' townies are destroying the religious beliefs that are held so dear, or an argument between two opium producers. Tamim Ansary is too wise to wrap this book up with a final chapter setting out a couple of simple stages that will lead to an enlightened Afghanistan living happily ever after, but he does offer a glimmer of hope that things may, slowly, be moving towards a better tomorrow: let us all prey that he is correct.

(Perseus Books Group kindly gave me a pre-publication galley of this book, but it will be available to the general public on 27 November 2012.) Of all the histories I have read on Afghanistan, and I have read more than a few, Tamim Ansary's is absolutely the best. Whether your knowledge is a clean slate and you are looking for one book that will explain this complex nation, or you are fairly conversant in the country, but want a brief refresher, Mr. Ansary will lay out everything you need to know in his latest offering. [b]Games without Rules[/b] begins with the rise of the Durrani line and brings the reader up through the present, with reporting through May of 2012. Tamim Ansary does a number of things in his book that make it especially accessible for readers, but chief among them is linking events in Afghanistan to events with which his readers might be more familiar, such as the fact that the opening of his work, the dawning of the Durrani Empire, with its founder Ahmad Shah Baba, known as Afghanistan's Founding Father, happened in 1747, roughly the same time as the founding of the United States of America. Over the course of reading the book the reader will also learn a great deal about the histories of India, Pakistan, and the neighboring central Asian republics, as the destinies of these nations and that of Afghanistan are all inter-linked. Another fact about Mr. Ansary's writing that becomes quickly apparent is that this is not the writing of a dry, boring scholar of a historian. While never stooping to comedy or disdain, he manages to always keep a storyteller's mien, full of adventure and humor and at times even anger and despair. In addition to being written in an easily accessible style, this history is very well organized, carrying the reader seamlessly from one era into the next, clearly illustrating how each event, and not always those occurring solely within Afghanistan's borders, caused the next to proceed. Perhaps most valuable is Mr. Ansary's explanation of Afghanistan's placement upon the world stage-the role that it has played over the last two hundred years, so often caught up geographically in the maelstrom between world powers, for instance, between Russia and British India. As he takes his reader along on a journey through the various powers, foreign and domestic, who have vied for power over her people, Tamim Ansary, in a marvelously conversant manner, gives a cultural education that is unparalleled. From the cities to the furthest reaches of the valleys, the governance and social customs of the country are explained, and he uses this information to break down for the reader exactly why he feels that attempts by various foreign powers over the centuries to govern the Afghani people have not succeeded. His analysis is insightful and well-laid-out, and for those not well-versed in the subject, this book will prove especially useful in helping you to understand exactly why the political and social situation there is so complex. My one very slight reservation for my conservative readership is that Mr. Ansary is very clearly a liberal, and that does bleed through, especially with regards to our current president. He is quite a fan of the president's policies with regards to Afghanistan, something with which most conservatives do not agree. To give credit where credit is due, he also admits that Clinton made errors while in office. However, for the most part he does strive for partiality and is generally successful. No matter how conservative your leanings, you would be doing yourself a disservice not to read this book-Mr. Ansary's political views only come into play in the very last section and are toned down enough that even this conservative reviewer did not find them obtrusive enough to overwhelm all the excellent material contained within the rest of the book. And I personally found his views even here to be insightful and interesting, even if I might not agree with them. In four hundred pages of reading a person's time will be well vested here. I give Tamim Ansary's newest history my highest endorsement, not only for the knowledge it imparts, but for its readability. If you read one book on the modern history of Afghanistan, her culture, her politics, and her role in our global peace (or otherwise), this should be the one you reach for.

This is a book I needed to read if was to get beyond the cable news sound-bites, and slanted political rhetoric of our Central Asian conflicts and Afghanistan in particular. I have previously read several books covering Iraq, Afghanistan, and Pakistan, but they were not comprehensive and were often biased to a particular way. While it is not superbly written, this book is quite competent and fills an important need for anyone wanting a view of the whole. The author was born and raised in Afghanistan, but left and came to America several years ago. The volume is essentially three different works. The first is early Afghanistan history, and the author plays the role of an entertaining and highly personable lecturer on the subject. I found myself wishing I had him teaching me in other classes. As time continues, the events in Afghanistan start to touch on things on which the author's father or other relatives were personally involved or that the author remembers directly from his youth. As such, the narrative starts to take on a more personal, less scholarly tone. Finally, the reporting comes to more recent times, times in which the author was an adult in America, like me, and thus, had cable news, the Internet, and some relatives still in Afghanistan to color his narrative. In essence, if this had been about a sport, like baseball, the early part would have been about things such as how many home runs Babe Ruth had and the later part would have been about what a bum the current Yankee manager was and what they needed to do to win this year's World Series; quite different creatures. In the end, the author fully justifies a simple conclusion about present day Afghanistan: working for a "neutral-Afghanistan-serving-nobody's-interest-fully" or "awful-quagmire-Afghanistan-sucking-down-yet-another-hapless-great-power". He actually offers a solution, but you must read the book to find it and decide for yourself if it is viable.