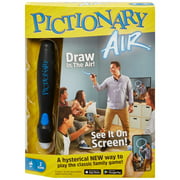 Great fun for a night in during COVID scare.

So much family fun! We are happy with this game.

We had a blast with this game! Easy set up! Just download the app and start trying to draw! The only real issue i had was with the lighting on the video! We had every light on and it still came up dark!

Some of the clues on the cards were a bit challenging, but we definitely had fun with it!!!! [This review was collected as part of a promotion.]

A lot of fun for families or friends

Have to get super close so your phone can read the drawing pen .Super fun though(Once you get the hang of it)!!

Ok for Android not IOS

Fun but does not work with IOS devises

Can't get it to connect to our smart TV like you are supposed to be able to, so we have to play it off our phones.

Save your money. This game is a joke. We had a very hard time using it and getting the drawing to show up on our screen. Also, I realize the point is to make it harder for the drawer as he/she can't see what is being drawn, but it's almost impossible to play and have a good time. We quit after 1 turn.

Not a good as it looks.

Plan on returning it, the wand didn't work very well, plus it would pick up light from lights in the room. I thought it would be a cute game. It's a very cute idea if it worked.

Reviewed by JudithJudith
Helpful?
Comment from department -
We're sorry your wand wasn't working properly! It works in a dimly lit room, not overly bright. Reach out to our Customer Service team for any questions or concerns, and we'll be happy to help! Phone support is available at 800-524-8697, Mon.- Fri., 9:00 a.m. - 6:00 p.m. EST.
Average Rating:(1.0)out of 5 stars85ratings, based on85reviews
Verified purchase

It's rather difficult to draw something to isn't see. Not an improvement from the paper and pencil model. Would not recommend.

Reviewed by LuisellaLuisella
Helpful?
Comment from department -
We're sorry for your disappointment. Thank you for your feedback!
Average Rating:(1.0)out of 5 stars85ratings, based on85reviews

It took a while to set up the app and tv casting but works well once the tech is sorted. However, during play the app constantly displays irritating ‘tips' RIGHT ACROSS THE PLAY AREA! So you cannot see what you're drawing properly. This tip feature cannot be turned off so ultimately it's not playable, which is a great pity as it has a lot pf potential. Seems underdeveloped

After receiving this to review, my kids couldn’t wait to have a game night! They had so much fun using the “wand” to create their pictures! The only issue we had is that from time to time random lines would show up on our “pictures” even when we weren’t pressing the button. The good news is that we were basically able to decipher between our actual drawing and the random lines. [This review was collected as part of a promotion.]

This was a completely cool concept and for the most part, it delivers on its promise. Somewhat of a learning curve, but my 7 year old figured it out and we've had a blast playing with it. Worth the buy! [This review was collected as part of a promotion.]

New twist on an old favorite!

We are Apple users so mirroring my screen to our Apple TV was no problem. Takes to time to figure out the kinks (lighting, pen usage, etc) but once we got going it was a fun game! Lots of laughs and great family time. Seeing the game on the TV is a big advantage if you’re hosting a large group or have a large family. [This review was collected as part of a promotion.]

A fun take on Pictionary, Ages 8+

My family was excited to try this! After downloading the app on an iPad and setting up the camera against a different wall from the TV, we were able to cast to the TV for the players guessing. The pen does not require Bluetooth to play this, just pop in the battery and turn it on. It responds to the light-up color of the pen tip, which is red when you turn it on and green when you hold down the button to draw. Part of the fun is that you can be a little “off” as you’re drawing, because you cannot see the lines you’ve drawn. (If you do happen to try to watch yourself on the TV, it makes drawing harder because it is a mirror image). The “ink” color matches whatever team color you choose. It defaults to Blue vs. Yellow (which matches the color of the cards), but you can adjust to others, like pink, green, orange, or purple when setting up a match. During setup, you also choose how many rounds (a minimum of 3) and how much time per round (a minimum of 90 seconds). Ideally, I would’ve liked to have had the option to customize time lengths per team in case you want younger players to have more time. Speaking of ages, this game is listed as Ages 8+, which seems about right. My 5 & 7 year olds played this, with varying difficulty. 5yo needs someone to read the clues to her and has trouble keeping the button held down on the pen when trying to draw- so overall, too young to play but wants to be included so we had one of the grownups help guide the pen with her. 7yo needed a little help with reading the clues, but could navigate the pen fairly well. Both got frustrated at points, but my 7yo still loved it and wanted to keep playing after the rest of the family was done. They also had to be reminded that they could interact with their drawings to help guessers. With older players, you wouldn’t have some of those issues, and I would definitely recommend as something to try for game night! The only other minor complaint is that the clue cards are supposed to be the same level of difficulty, but there are definitely some that seem a lot harder than others. As the game is running, there’s a way to keep track of clues that have been guessed correctly by clicking on the star icon (which also clears the drawing for the next clue), a pause button, and an eraser to clear whatever’s currently drawn. For my younger ones, we used the pause button at times to give them a little extra time to think. I imagine we’ll continue to get more use out of this game as the kids get older and I look forward to playing with more adults once the pandemic lockdown is over! I received this product for free in exchange for my honest review. [This review was collected as part of a promotion.]

I wanted to love this game. However, once we figured out that we could not cast it to our tv, it became complicated to play holding an iPad for everyone to see. The concept is awesome and so much fun, but the awkwardness of the iPad made it difficult to fully enjoy it. [This review was collected as part of a promotion.]

Great tech-spin for a classic!

We had lots of fun with this game! Drawing on the air and watching on the screen adds more excitement to it. My only suggestion would be to be clearer about the need for streaming devices in order to use it on a TV, since it does not have a direct way of displaying without a smartphone/tablet app and the streaming device connected to it.

This is a great idea that does not execute well. Difficult to set up if you have certain devices that are not "i" related. Could not cast to the tv either after following all directions. Very difficult to draw anything that looks better than a 2 year old's sqiggles. Would not reccomend, unless you just want an expensive set of pictionary cards. [This review was collected as part of a promotion.]

I love this game! I bought this for family night and so glad I did because the entire family enjoys it. We love being able to get together as a family and play a game that we can all play. I played Pictionary when I was younger and this new more technological way is amazing. We love to draw in the air and try to guess what the picture is. It can get hard with Writing in the air but it makes it more challenging and fun. We can play for hours and we laugh which is the best thing about this game! Hearing my kids laugh makes Pictionary the best game ever.