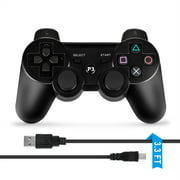 No problems with it. Synched with my playstation

This a good time controller,so sharp Arrived a week before due date

Does what it is supposed to

The packaging for this controller was a bit confusing, it came in a brown box wrapped in bubble wrap. It did not come with any instructions or charging cord. At first, I thought it may be a refurbished item because the lack of packaging and absolutely no paperwork, no instructions of any kind. It did however look new once unwrapped from the bubble wrap. Using the standard Sony charging cord, I was able to get it up and running. This controller was able to be synced and worked well with the Sony PS3. It works as well as the standard Sony controllers.

I received this product from the Spark Reviewer program. We are big gamers in this house and this was great to get another remote. We play all the consoles and PC games. Great controller and it's blue tooth.

This is not a Sony product but is compatible with all the systems. It is a nice product and works well for the purpose. It is not as expensive as the name brand either. Unlike the bluetooth capability.

You have to turn it on, in order to pause it, or manuever even though you're using it while viewing. Very frustrating. Other controller stayed "alive" when using. It needs to be charged too frequently

Reviewed by MomOf4BoysMomOf4Boys
Helpful?
Comment from department -
Hi dear customer, sorry if you are not satisfied with this product. If there is anything defective of the controller, please do not hesitate to contact us by mail to Fanny@aprilbiz.com, we will resolve your issue ASAP.
Average Rating:(1.0)out of 5 stars95ratings, based on95reviews

Chines junk. Wont hold a charge and something has come loose inside the controller. Guessing the piece that makes it vibrate

This is probably the closest thing you can get to the original system controller at a significantly lower price. The controller feels solid and the (square, triangle, circle, and X) buttons are very responsive. The D-pad also feels well built and sturdy. The trigger buttons mimic the design of the original controller, though I wish they were more like the PS4 trigger buttons which feel much more natural in the hand.

The analog sticks have the perfect pull when pushing the sticks in any direction. The dead zone could have been slightly better, but when comparing to the original system controller, I could not tell a difference. Overall, characters and objects controlled well when playing games but still wish the dead zone was a bit tighter so that it would require a slight push to make your character/object move.

Bluetooth worked without any issues once synched to the system. I tried both wired and wireless (bluetooth) connections and did not have any disconnect issues.

The only negative is that the PS3 System is an outdated system and is only available to purchase used. But if you are looking to replace an old worn out controller, you can't go wrong buying this one. Therefore, I recommend it and submit a positive report.

My son loves it. Close to the real one

ordered 2 controllers, one will not hold a charge and 1 will not even take a charge

Ablegrid wireless PS3 Bluetooth controller is a great controller. Basic controller and good value. Works just as well as the $65 controllers I bought my kids in the beginning. I believe this is a great option for replacement controllers or to have a few extras on hand. You can't beat the price. My kids are just as happy with this one as they are the original ones. I would recommend.

Broken out of the box

I bought this controller for my PS3 a few months ago and it never quite worked right. The R2 button would sometimes work, but sometimes not. I put up with it for awhile as I work a lot and don't have a lot of time for gaming anymore. Today, I was sick from work and that R2 button just quit altogether.

Reviewed by RytchRytch
Helpful?
Comment from department -
Hi dear customer. All the controllers are brand new and tested. So sorry for the issue you met. Please don't worry, reach out our customer service team at cs@ablegrid.com, reship or refound promised. Hope to hear from you soon. Have a nice day.
Average Rating:(1.0)out of 5 stars95ratings, based on95reviews

The controller is not originally made by playstation, might be refurbished or after market made. The controller has a hard time connecting to the PS3 console every time you turn it on, even after mated with the console via the supplied wire. The controller keeps turning itself off after 1 minute of standby while you are watching Netflix, YouTube or DVD. I also purchased 2 but only received 1, the shipping email label said they would arrive in separate packages but he i am 1 well later from the arrival of the first controller and no 2nd one in the mail yet. This was sold by 3rd party seller.

Reviewed by UtahByronUtahByron
Helpful?
Comment from department -
Hi dear customer, sorry for your experience. ABLEGRID wireless controller is non-original but every controller is brand new and all the functions are same as original. For that you ordered two controllers but recieved one, we ship thousands of packages everyday ,your package may lost by post office and this happens sometimes. As customer's satisfiction is our top proiority,please reach out to our customer service team at cs@ablegrid.com,we will solve your issue ASAP. Please dont worry, reship or refund promised. Looking forward to hearing from you soon and have a nice day.
Average Rating:(5.0)out of 5 stars95ratings, based on95reviews

Great controller! Awesome price! We've had it for 2 months now with no problems and my kids are ps3 freaks. That's all they do is play!

Excellent value for the money

This is a perfect replacement for one of my son's broken original PS3 controllers. We are very satisfied with the purchase. It does what it should and works great.