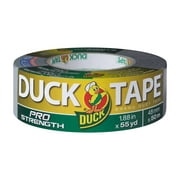 I use this in crafting projects, I insist on this brand and the advanced strength. It works great for anything else around the house that may need a fix too.

Came in a big box I can reuse. Thanks

It's great. Everyone loves duck tape.

It works for almost everything.

Best product on the market,gorilla tape does not even come close to this product! The durability and reliability of this tape is quite unique and can be used for so many industrial and everyday uses. Don't waste your time or money with anything else.

Excellent product that you should not be without!

I always have at least one roll of duck tape in my house because of it's many uses. I usually get the regular strength duck tape, but after moving recently I decided to restock my toolbox with the professional strength duck tape so I would have more sticking power without having to use a lot of tape to finish a project/repair. One of the best things I've done. It exceeds what I thought it would do while still being easy to tear even if you have weak or sore hands. Right now my main use for duck tape is fleas control. Yes, I said flea control. It works great and even the biggest fleas cannot pull themselves off the professional strength tape! There is at least one picture on the net saying to use a lint roller on yourself & your dog if you've been outside where ticks could be living. It's great advice, but bugs can pull themselves off a lint roll. But using the professional strength duck tape you don't have to worry about fleas or ticks escaping to bite you and your family.

This product is what you would expect for the price but NOT from the DUCK BRAND. Advanced Strength should be removed from the description. This is basic, thin, with fiber and not so easily torn by hand. Would recommend this for a basic tape only!

Cool day but not cold. Ended up throwing it in the trash. Not sticky for use with a plastic tarp. Touched the tape and it had very little adhesive.

I have used Duct Tape for many years. Like so many others I use it for anything and everything. I bought this tape because it said "Pro Strength". It sticks to NOTHING! I pulled out about two feet of it to see if maybe it got stronger farther in the roll. It didn't. What a waste..... I will be returning it today.

Pricey yet already ruined--breaks , even new scissors Never use outdoors No stick,fails off in covered dry protected porch. Perhaps 1/4 day good for you. Already in trash Not even inside ?? No!

I was using this on moving boxes, before I even put anything in the boxes the tape was falling off of all my made boxes. Use your money to buy great duck tape at home depot. This actually sticks and stays for the same price!

I just got 2 new tail lights last summer//and yes already some i has backed into 2 of them..Only small pcs missing but still...I was MAD...I used a small pcs of this duck tape to cover up the hole in my tail light...works great even w/ all the snow this winter..

i love this duck tape

Fixed my cooler bag on the spot

The handles on my cooler bag kept breaking so I used duck tape and it is still holding nice and firm even today. Will also take the weight when the bag is full.

used to be, that i carried duck tape everywhere & was my go-to for everything from costumes to projects to fixing things and especially for killing bugs. sadly, now, again, i have another giant creepy spider that is probably angry and lurking about the apartment. i am the one who takes the broom and puts a bit of duck tape at the end to reach the creepy crawly that has detoured from the outdoors. in the last six+ years, regular, advanced, decorative, and other styles of duck tape have been almost non-stick - just now, four four inch pieces off of a new roll of Professional Grade Duck Tape had problems sticking on the end of the broom and even to itself on the end of the big "bug stick" already covered in duck tape. so, not a surprise that the tape did not even stick a little bit to the dime sized spider up high on the wall, i used the "bug stick" with the broom handle underneath it because i have been conditioned that i need a back-up - none of the pieces stuck and the spider dropped, aaarrrggghhh... so, used to love duck tape, but even the Professional Grade Duck Tape is a disappointment for me now :(

Way better then those scotch tapes. works like a charm