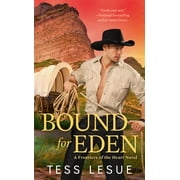 This review can also b...

This review can also be found at Carole's Random Life in Books. I ended up liking this book quite a lot. I decided to read this book simply because I thought that the premise sounded rather interesting and I usually enjoyed historical western romances. This was one of those books that was really hard to put down once I started reading. I am so glad that I decided to take a chance with this book. Alex and her siblings find themselves in a lot of danger at the start of the story. Everything that happened at the beginning of the book really got my attention and I found myself wanting to read just a bit more. They flee their home to head to their older brother's home but have a long way to go. Some bad men are after them so Alex decides that the best way to escape attention is to pose as a boy. Since the Grady brothers are looking for two women and a man, they will be much harder to find as a boy, woman, and man. I liked this book despite the fact that it had a few things happen that I don't usually enjoy. I don't usually like to see a book's Hero with other women and that does happen in this book. I don't mind so much when it happens before the story starts and is talked about but I don't need to see it on the page. I am also not a huge fan of any Hero that is almost having to beat women off with a stick. I love Luke but I don't think any man is that universally appealing. I also found that I doubted Luke's intelligence. I don't really think that it is believable that he could have spent so much time with Alex without being able to see past her fake identity. All of these things actually worked for this book. I think that some of the charm and the humor worked into the story only worked because Luke was a clueless but irresistible man. Bravo to the author for making me like all of the things I wouldn't usually care for! I liked Alex and Luke. They both had a few flaws that I felt added to their appeal. Alex was tough and determined. I did find some of her early reactions to Luke to be a bit unbelievable but it worked with this story. Luke really was a good guy. I liked the way that he took Alex's family under his wing and felt responsible for them. There were some wonderful secondary characters in the book as well, such as Alex's brother and sister, the local madam that sees everything, and a few members of the wagon train. I thought that the Grady brothers were great villains that I wanted to see defeated. I would recommend this book to others. I had a lot of fun with it and found it to be a quick read. There were a few laughs and a couple of surprises along the way that kept everything very interesting. I was happy to see this couple make it to there happily ever after. I look forward to reading more from this author in the future. I received a digital review copy of this book from Berkley Publishing Group via First to Read. Initial Thoughts I liked this one. It was pretty unrealistic but I still enjoyed it. It took Luke way too long to figure out who Alex really was but there were some good moments along the way.