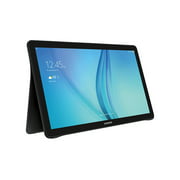 I love this tablet. Can't find 1 like this anymore. I have had mine several years now. Its impossible to fund a tablet this size anymore. My mom really wants one because she has a hard time seeing another anymore.

After reading the reviews, I'm able to critique beyond the known short comings. That being the stand that doesn't lay flat and no remote control for a great TV. As a computer, it has replaced my main computer because I like the operation of the Android O/S over Windows10. I have to buy more accessories like a bluetooth keyboard and any USB devices will need to be the newer micro-USB. The onscreen keyboard is good but typing a lot you will want some keyboard response when typing. TV...WOW... It was built for streaming. We watched OSU vs. Mich game from Dallas to Houston on the road and it never once buffered like my other tablets on the same cellular network. TV resolution is awesome 1080p. Tablet is upgradeable to additional 256Gb microSD card.

This IS the Tablet for the Visually Impaired

Before I bought the Galaxy View, I bought three other tablets. The others are all fine, as far as they go, but my BIG PROBLEM was finding an instrument, at once large enough and clear enough, that I could read e-books effortlessly and without breaking their formatting by overly enlarging the text.

Well folks....the Galaxy View is the ONE! I can read even EPA Professional Publications with ease and the touch screen is large enough for me to negotiate quickly and with two hands.

All the other lovely things about the Tablet, reading e-mail, live streaming, using Android Apps, are, of course, there, but for me, simply having a took that really and finally meets my needs is a Godsend. So, if your vision isn't exactly hawk-eyed, you might try getting THE BIG ONE--The Galaxy View 18.4'.

The View 18.4 is big, great screen plenty of power i stream videos with no ghosting or stuttering. I have the 64GB model and I added 128GB micro SD card.

I am thrilled to have this Galaxy View 18.4 " Because of the largest screen is wonderful for low vision! I am legally blind.... I can see better!!!!! I really really love it! Also, I am not going to enter for AT&T, and I am still looking for prepaid on the different wireless carrier... So, I wish that Galaxy View should have inverted large pointer, so, I can see where the pointer location. I have Bluetooth mouse with me. Please ADD the inverted large pointer for low vision!!! because of black is not enough to catch ( see) the black pointer!!!!! Thank you!

This is my 1st tablet so it's all new to me but this was easy to get started using. After I downloaded Netflix and a few games to play, I was comfortably using this tablet like I've had it for years when really it's only been a few days! The display is fantastic, the sound quality is impressive too! My only regret is that I didn't buy this earlier and spent a lot of time squinting at my phone to watch videos and play games when I didn't have ro!

This is by far the best decision I ever made when I purchased this product.

It is easy to handle, very responsive, it has a very nice elegant look. I use it as my TV when out on the deck by using the uverse App.

You want be disappointed so hurry up and purchase yours today.

I have now been using my Samsung View for a couple of days and I love it. I can watch TV do a paper for a college class and even sidesync to my phone so nothing is missed on my phone while doing anything on my View. I am just learning everything I can do on the view but so far it seems I can do anything a laptop, tablet or a TV can do all in one device. AMAZING!!

It is very big. People ask me if it is TV. The screen is pretty clear it shows a really good picture but as far as a video the sound is good. I hope they do come out with a protective case for it. When I carry it I am very worried because of its size that I will hit it on something. Wondering if the stand is detachable. For the size though it is pretty versatile. If you like a big tablet this is it. And it does have a full key board I really like that to. I'm not fully sure what all I can do on it but I would like to find out. Have a good day everyone and if you get one enjoy.

trying if out for 15 days (11/23 thru 12/8 will update...) its just to big to be portable, l travel between NJ and PA every few days and its just to big to set up it the car or just take any where. l have not even set up 4G yet cause do not know if i will keep it yet. For a 18 inch screen only 1080p?!?! No 1440p or 4K which will have made this killer, and that Direct TV Menu you cant turn off is annoying cause i dont have it and the wifi version have the video menu that i like but not on the LTE. l like Samsung tablets want 2 more but this 18 inch is just a tad big for my taste and may return it for the Microsoft Surface 3 LTE.

Exactly What I Was Looking For

Ah, finally a screen that I can actually see! My wife compares it to a semi-portable television set, and I suppose that isn't far from reality. The screen size is even larger than my 17" laptop, and since it is a tablet, it is lighter and touch-screen capable, thereby being more useful for my everyday applications. I play games on it, as well as watching my favorite programs on various streaming services.

With the addition of this tablet, there is far less conflict surrounding what is on the TV, as I am perfectly content catching my show on the glorious screen contained in this beautiful gem. Prior to this purchase, I was loathe to watch anything on my phone or tablet, as I really found it both difficult to hear and see. Both of those issues are a thing of the past.

Setup was quick and easy, and everything from my old tablet (Galaxy Tab S) transferred right over. I really could sing the praises for almost all of the features in this. Yes, almost all.

The View is so close to perfect. There are only a couple of small issues that detract from that coveted label. The first is the built-in stand. It is good, but that's all. It only has two positions, and while it does seem as though it is removable, I have not attempted to remove it. The two positions are handy, but I would really like to have additional options. If they could add a few more positions for the stand, that would alleviate a great deal of what detracts from it, in my opinion.

The second issue that I have is with the built-in speakers. Like most electronics, they face the rear, so a large portion of the volume is wasted (at best) or just annoys anyone else in the room (at worst). The volume is fine. My hearing is poor, and I'm still able to make out clear audio (especially voices) on anything I've watched so far. If the speakers faced the front, I think I might be in love. As it stands, it is only a strong lust.

The price is a good deal, I think. Given the cost of the best smartphones and (much smaller) tablets, it falls right in line, and was actually cheaper than my S7 Edge.

Overall, an exceptional product, and one that I'm glad I picked up. Maybe the next model will fix the very small details that keep it from true electronic MVP.

With 2 small very fixable exceptions ths is above excellantr product

The two exceptions that I put in the review title are: 1. There needs to be a substitute for Adobe

2. I would like to see a collapsible for better storage.

My view has been used every day for more than a year and a half. The battery stays charge for at least 12 hours while in use. I love it. No complaints here.

Great Options in a Medium Package

Great for entertaining without the need of a TV. Best at lunch hour for watching movies and letting stress go. Great screen definition, resolution and speed.

Samsung has done it again. This new Galaxy View Tablet is the best. Not only is it big it's fast and it has a handle so carryibg it is a breeze. I love it...

In the search for the perfect i have tried nearly every large tablet. This Samsung View is the best! You can use 2 pages of music up all the time. It provides great storage options to have all your music available from individual song to huge technical studies book (if you care to scan them). The battery life even on older after 3 years continues to amaze.

Love that it's bigger than usual tablets

I got this about a month ago..needed something bigger than a regular tablet..I love that it has a big screen and a great picture..everything is clear..... I listen to music and watch movies and WOW the sound is great...it's just like a tv!!! LOVE LOVE MY NEW SAMSUNG GALAXY TABLET....

I have had several different brands of tablets and so far all of them except the Samsung have been worthless. The Samsung tablet has work far longer than any of the other brand of tablet that i have tried.i woukd recommend that of you plan to get a tablet.get what you want and need but like i said i would definitely get a Samsung.

I can't seem to get my e-mail contacts into my e-mail section, and also can't get my bookmarks from my computer to my lap top home page. Other than that it really works great and is easy to operate, and a great screen. [This review was collected as part of a promotion.]

This product will not disappoint you

Love all of the Samsung electronics, they have not disappointed me yet, this particular large tablet is amazing, I love doing crafts, and while working I can always depend on Samsungg to take me where I want to go, whether is watching youtube, or the news, or whatever hits my fancy that day, lol.