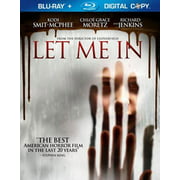 The ancient, probably horrible looking vampire (we never really see) presents itself as a cute adolescent waif in order to seduce an adolescent boy into becoming it's next assistant/blood procurement worker after the one he had kills their self. The boy never realizes he is not helping a sweet girl, he is so stupid. This is a horribly creepy movie.

I loved this movie! I didn't know what to expect from this movie going into it, but it really surprised me at how great it was. It is now one of my favorites. This is much more then just a horror movie, it's also a wonderful and touching story about childhood friendship and young love. It's got suspense, thrills, action, drama and even romance. This definitely not a movie for kids, but I would highly recommend it to any adult looking for a well made suspenseful and mature supernatural tale. I would definitely recommend this great movie to any movie fan's DVD collection.

This is a reinvisioning of a book I have never read, I have seen the original swedish movie, and even though they are very similiar, they are both very different. Mesmerizing and enticing. The movie draws you in and surrounds you with it's "essence" and you find yourself sorry that it has to end. And just when you fear it is over, there is just a little more movie to satisfy you.

A great vampire movie. So different from all the others. Based on original Swedish? film titled, "Let The Right One In." Fabulous. Chloe Grace Moretz and Kodi Smit-McPhee give mesmerizing performances. It was electrifying!!

A very well directed and performed story around the well over done curse. This is a must see.

Let me in is a true to the original retelling of the Swedish film ‘Lat den ratte komma in' which was based on a book. The original film was based in Blackeberg, Stockholm but the in the American version the action has shifted to a small town in New Mexico. Director Matt Reeves has chosen the year 1980 as the year in which things unfold, this has to do with the Reagan American thought process of the time of good and evil, communism. There is Owen (Kodi Smith- Mcphee) who is fighting his own fight with the school bullies, he is terrorized every day. He is lonely and friendless, it is during this time that a young girl Abby, a 250 year old vampire, according to the original book (Chloe Grace Moretz) moves next door to him and they begin an unlikely friendship which will change their lives forever. I would not go in to details about the films pace and events as I think it would give away the story but this is in short, a very remarkable film about loneliness, finding friendship and companionship in the most unlikely places. The pace is slow and the director has not relied on sounds and CGI to bring the story to life. The horror is very subtle and the acting is amazing, two gifted young children have given such a good performance that it would give many grown up actors a run for their money. The cinematography is splendid and so are the other supporting actors. Nothing has changed from the original film; the soul is still intact only the setting has changed with a few minor changes. I highly recommend this film 4 stars. 6/20/2011

In my opinion, this is a very dark, dangerous movie. The subject matter is so subtle. It asks the viewer to sympathize with a murdering vampire just because she is a child. They direct this movie as if is a drama story worth telling, when, in actuality, it is a portrayal of a young boys' lonely and bullied life; someone that can only get befriended by a very dark creature. Then the story asks the viewer to be greatful that the boy has a vampire as his friend. This movie has the audacity to suggest that a troubled boys' only hope is to befriend, fall in love with, then give up his lowly mortal life to serve this vampire girl and grovel at her feet. This is very dark stuff that will hurt the most vulnerable of people, especially children and teenagers trying to find their way in this tough world.