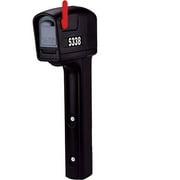 We priced this item at a number of retailers, Wal-Mart's price was the best. Set up was easy,my husband had no problems or glitches with installation. It is big and roomy and fits all mail and magazines.

Doors stay closed well because of magnets, as opposed to friction. Easy installation, can't be easier to assemble. Took no more than 5 minutes to install over previously set 4x4. Neat look compared to many others.

Very pleased with item.looks very good in front of the house. Didn't take long to put it up, about 50 minutes. Just ordered one for my mom. Would recommend.

This mailbox is the perfect size for anyone's needs. I purchased this in black to match the trim on my new home and to replace the old metal one the previous seller tried spray painting black only to drip off in all the recent rain. I have purchased this same mailbox but in a different color for my old residence and no matter the elements it kept giving. I love the magnet that is used to keep the door closed. Even though it is titled "Trimline" it in fact holds all types of mail from thick magazines to small boxes. I would recommend to anyone.

My husband and I are both handicap and was able to put up this mailbox. We love the look and is more sturdy then or other old mailbox. Very very HAPPY. Best looking mailbox on the block..a plus!

I purchased the MailMaster mailbox to replace my old one. Super easy to assemble and install. Durable; and unlike my old mail box, rust proof. I would highly recommend this to any one who is looking for a new mail box.

Nice construction, open from either end. Mounts over a 4 x 4 post, super easy. Numbers for house location included. I purchased, not realizing they were in the box.

This was a housewarming gift for my sister who just bought her first home. She absolutely loved it so much. We liked it so much as well that we bought another one for our own home.

This is a very good mailbox. It was easy to install. Admittedly, I had an existing 4x4 post from my old mailbox already in the ground, which made things a little easier, though I did have to cut the existing 4x4 post down a couple of inches to adjust the height, as it was a little too tall. But the install was very straightforward. I love the rear door access to the mail and bought the mailbox in large part because of that feature. And the magnetic closure is very nice and a GREAT improvement from a similar mailbox I had before that was just pressure held for the doors and eventually stopped holding the doors closed. Also, the included address numbers was a nice touch. (I did have to call the company to get an additional sheet of numbers, as there were not enough of one digit to complete my address on both sides of the box. But they were very accommodating and sent me out another sheet for free. I had to provide them a label number from the shipping box, so be aware of that--hang onto the box for a day or two until you are sure you are done.) The mailbox is a touch smaller inside than it looks from the outside, but it is plenty big, nevertheless. The only initial issue I had was I found the mailbox on the Wåalmart website shown for a lower price of around $54.64 (lower than most sites). But the order was fulfilled by Wayfair and was the higher price or $67.99. But the lower priced appeared to be a site pricing display error by Walmart. The order page showed the correct price. I would definitely recommend this mailbox.

Mailbox barely holds an express envelope... But installation was easy and the flag seems nice. Over all the plastic is not very thick and the bottom part that covers the 4x4 still allows the wood to show through.. Could have been larger..

Received mailbox in a timely manner- it installed very easy, and my husband had no problems at all..Used 4x4 lumber, and post hole digger, a little concrete to set it, and an hour later it was finished- the numbers for the address was even included in the box--and we love the back opening so we can get the mail without going into the street...and it looks super nice !! Needless to say, my husband and I are both very, very pleased and would- and have-recommended this to friends ..Thanks Walmart !!

This mailbox was a great purchase. It is well constructed to last for a very long time. Comes in three colors. Was easy to install and looks great at the curb. Everyone is asking me where I got my cute mailbox. Great latch system that keeps both doors closed which keeps the mail inside. The rear door keeps me in my yard and out of the street traffic, making it safer for me to get the mail. And purchasing it at Walmart saved me lots of cash over those large home improvement stores.

I am a 65 year old woman and I did it myself with a post hole digger and a bag of concrete. I cut out the grass (sod) so it would be a finished product when finished. Used the post hole digger inserted a 4 foot 4 x 4 post 2 feet down added shovels of concrete dry not mixed to fill in space around the 4 x 4 post. put the sod back watered and done.

Sturdy and easy to put up.

Sturdy and easy to put up. Ample room in box. Sleek clean lines.

Easy to install, Includes all hardware

The box is easy to install and comes with all necessary hardware (2 lag bolts, and 6 screws), it also came with the numbers to label the box. Now if only I would get some mail!

Love it!!! I live on the main road in my subdivision, which is busy. The door on the back side of the mail box is great, so I don't have to go on to the road to get my mail. It is durable & a great price. Thanks for an awesome product.

Good and attractive product for the price.

It was easy to set up. My three year old helped. As far as lifespan, we will have to wait and see.