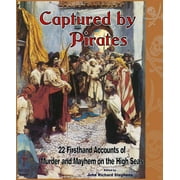 $9.99$9.99$9.99$9.99
5
Average Rating:(5.0)out of 5 stars
1 ratings
5 stars
1
4 stars
0
3 stars
0
2 stars
0
1 star
0
5 stars
1
4 stars
0
3 stars
0
2 stars
0
1 star
0
Pirates are primarily known for their swashbuckling attitudes, their freebooting lifestyle, their high-seas adventures and their stolen treasure, but their victims tend to be forgotten. These are the innocent and not-so-innocent voyagers who find themselves suddenly snatched up, brutalized, and fran
1 review
Average Rating:(5.0)out of 5 stars1ratings, based on1reviews

Twenty-two accounts of people, mostly professional seamen, who were captured by pirates. Most of the accounts span across 100 years, from the early 1700's to the early 1800's, and cover a wide variance of pirate behavior. Some crews were of the gentlemanly sort, who kept violence to a minimum and were only interested in the cargo, while others were barbaric, such as in one account when a man was forced to watch as his captain's arm were chopped off and others of the crew were tortured to death. For anyone who doubts that meeting with pirates could be really scary, this is proof that surviving often came down to pure luck.