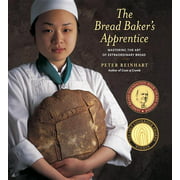 The Bread Baker's Apprentice - Mastering the Art of Extraordinary Bread - by Peter Reinhart and published by Ten Speed Press Berkeley is an impressive cook book. If you want to bake great bread and if you want to have great advice in this sense, go for it.With love, passion and experience, the book is celebrating with this edition the 15th anniversary.Peter Reinhart will explain you the art of baking. Best temperature, what kind of water to use, yeast and flour...All you want to discover regarding bread-world won't have any other secrets once finished to read this book.The longest section will be dedicated at the various diversified kind of breads from many countries and for all tastes and occasions!It will be simple to bake bread for everyone considering the accuracy of the instructions given by the author.A great book if you love bread and if you want to bake it at home.I thank Netgalley for this book.

Since I bought this bo...

Since I bought this book I have been baking the same loaf of bread almost every night for eight years. I can't remember what it's called, but it's the one where you throw together flour, yeast, salt & ice water then let it rise in your refrigerator overnight. I've expermented with other recipes here, but this particular bread recipe is perfect. I just take a bit out each night for the one loaf I'm going to bake, and the whole recipe lasts us about five days or so. I wish I had the skill & patience to tackle some of the more involved recipes here, but I found the one I need & will be forever grateful, as is my wife.

A great primer on brea...

A great primer on breads. This is the bread book I recommend for someone who wants to learn how to bake bread. The instructions are clear and easy to follow. Many images throughout the book. Interesting recipes, although many are a little rich/sweet to my taste. Recipes are given both in volume and imperial weights. Unfortunately, metric measurements are not given. The shaping instructions are adequate, but I have seen better. Overall a fantastic book for the beginner and advanced baker alike.

This is one of my very favorite books on breadmaking! I have an older edition in hardcover, so ws excited to have the chance to pick up the ebook version at a reasonable price. While I don't much like cooking from a tablet, I LOVE how easy it is to read even a large, heavy book on my iPad! Besides getting the revised version of BBA, I want to re-read the chapters on lore and technique. This is an excellent book for beginning and intermediate bakers who are seriously into learning to make excellent bread of a variety of kinds. My family and friends are especially partial to the Italian bread, but I've loved and had reasonable success with all the recipes I've tried.

A really excellent bread guide. Lots of great recipes, particularly the breads of Europe. But this is a serious book, with a lot of recipes typically taking several days before they reach the oven. However the results are worth it.

Very detailed, some re...

Very detailed, some recipes are time-consuming, but making most breads are so I don't see that as a problem. No duds from what's been made out of this book so far. Challenging, but rewarding too.

Summary: Co-founder of the legendary Brother Juniper's Bakery, author of ten landmark bread books, and distinguished instructor at the world's largest culinary academy, Peter Reinhart has been a leader in America's artisanal bread movement for more than thirty years. Never one to be content with yesterday's baking triumph, however, Peter continues to refine his recipes and techniques in his never-ending quest for extraordinary bread. In this new edition of the award-winning and best-selling The Bread Baker's Apprentice, Peter shares bread breakthroughs arising from his study in France's famed boulangeries and the always-enlightening time spent in the culinary college kitchen with his students. Peer over Peter's shoulder as he learns from Paris's most esteemed bakers, like Lionel Poilâne and Phillippe Gosselin, whose pain à l'ancienne has revolutionized the art of baguette making. Then stand alongside his students in the kitchen as Peter teaches the classic twelve stages of building bread, his clear instructions accompanied by more than 100 step-by-step photographs. You'll put newfound knowledge into practice with fifty master formulas for such classic breads as rustic ciabatta, hearty pain de campagne, old-school New York bagels, and the book's Holy Grail-Peter's version of the famed pain à l'ancienne, as well as three all-new formulas. En route, Peter distills hard science, advanced techniques, and food history into a remarkably accessible and engaging resource that is as rich and multitextured as the loaves you'll turn out. In this revised edition, he adds metrics and temperature conversion charts, incorporates comprehensive baker's percentages into the recipes, and updates methods throughout. This is original food writing at its most captivating, teaching at its most inspired and inspiring-and the rewards are some of the best breads under the sun. I received this early copy through Netgalley. For about five years now, I have baked my own sandwich bread each week, along with my own pizza dough, rolls, and most any bready goods. This book changed how I think about bread and offered me numerous, delicious recipes, too. The first portion of the book is on the science of bread baking. This is a fairly complex thing--as any baker will failed loaves can attest to--where yeast, fermentation, temperature, and ratios all play vital rolls. I appreciated Reinhart's attitude; he's not one of those cooks who says you must do everything a certain way. He lays the facts out there, saying you need these elements to make bread work, but play around with it, see what works for you. I did just that as I tested three recipes from his book: cinnamon raisin bread, white sandwich bread, and poor man's brioche. (One note on the ebook edition: it seriously garbled the recipes, skewing lines and ingredients in a way that required writing them down to interpret the data; I sincerely hope this is fixed in the final edition of the ebook.) The cinnamon raisin bread produced two loaves, so I did two variations as shown in the book: one with a swirl, and one without. Both turned out to be delicious, though the swirled one not only looked prettier when sliced but had a better rise. The white bread and brioche both produced enough dough for two small loaves each, but I opted to make each as a larger loaf while using about 1/3 of the dough to make rolls. I also modified the directions and used my bread machine to mix the dough, then did the second rise in the kitchen and baked them in the oven. The results were spectacular. Both recipes produced tender, delicious bread that worked well sliced for sandwiches and as rolls. My husband ate all the brioche rolls in one sitting and begged me to do a full batch of brioche rolls. I want to do that soon--and try the two richer recipes for brioche as well. I loved this cookbook. It's no wonder the original has been declared a classic, warranting this 15th anniversary edition.

if you are a hard core, scientific baker, this is the book for you. I have yet to have a recipe come out perfectly, but I put that up to me being a bit lax on my timing and measuring. Baking with Julia is a more forgiving book for the amateur baker, but I plan on working up to this one with time and practice.

Really loved the technique demonstrated in this book. Did not make time to try any of the recipes but I will borrow this one again and try in the future.

I think this is the best bread book ever. Great recipes include Light Wheat Bread, Napoletana Pizza Dough, Challah, Cinnamon and Sticky Buns, Cinnamon Raisin Walnut Bread, and best of all . . . Potato Rosemary Bread. Haven't had a loser recipe yet.

THis is the best bread...

THis is the best bread cookbook I ever read. Really good recipes, easy to follow. And the technique of bread baking is really broken down and explained well.

The best book about ba...

The best book about baking I have ever found. This book goes deep into the art and chemistry of making great bread. I recommend this to all new bakers who want to understand how to make good bread.