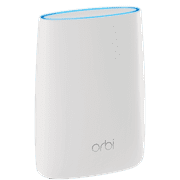 So far it is great. I live in apartments and needed something to extend my WiFi since I am a full time student, internet connection is super important. Being able to stream movies/shows/video games was a plus. I did have to connect an Ethernet cord from the satellite to my Xbox one to fix the lag there, but overall it's pretty perfect. I'm still connected to the internet if I walk around my whole complex. Worth the money.

Took a while to receive, but Router works great for whole home with my satellite lan hard wired backhaul. You may have to call your internet provider to authorize the internet connection to your router, before you begin the software setup installation. You will have to use the Orbi software installation program for cell phone IOS or Android depending on your cell phone type. You must complete the installation program for new installations for the Router to work which can take a while. Cannot tell any difference between hard wired HDTVs and wireless connected HDTVs. Walking around the house I have a solid continuance wireless internet cell phone connection therefore handoff between router and satellite appears to be seamless.

I purchased the new router to assist with my internet speed and coverage in my home. It has improved both considerably. Recommend this product, it was also very easy to install.

Integrates easily into an existing ORBI network. Family is happy that they can hit the network where they couldn't before.

We have a 3500sq foot home with about 10-15 devices connected depending on the time of day. We needed a whole home mesh system as we had to switch routers in different parts of the house. Tried the Linksys velop for a while, which worked ok for a while but was frustrating, slow and the satellites ( i needed 2 satellites vs 1 satelite with netgear Orbi), had to be reset frequently when the network slowed down. Not an issue any longer and no downtime. Love the system and highly recommend. Not a techie but without enough knowledge to set it up.

Finally, something that works

Up to this point, I've tried multiple range extenders. Have use Netgear extenders, Linksys extenders, with only limited success at best. I would have frequent signal drops, and I would have to do multiple device reboots to re-establish a signal.

The orbi is the first one that I've personally used that simply works. No more dropped signals, no more device reboots. Plus the coverage is exceptional.

The one thing I would caution about would be the location of the satellite. I had it in my first chosen location and I received a blue ring that indicated perfect connection. Yet, I still experienced a few minor issues. That's when I noticed on the orbi app on my phone that the satellite was showing an orange dot instead of a green dot. I Now understand that had something to do with what they call the back hall. I simply repositioned the satellite a little closer to the router, checked the app, found that the satellite now had a Green Dot, and everything's been good since.

Again, all I can say is, this is the first extender I've used that has delivered as promised.

Product does the job of improving wifi throughout the whole house.

Does not fit in my outdoor receptacle!

WiFi is pretty good but had to place this indoors because the power cord did not fit into the existing outdoor receptical. I was NOT going to call an electrician.

Reviewed by Mz.Liz66Mz.Liz66
Written by a netgear.com customer.
Helpful?
Comment from NETGEAR Team - 08/12/2020
Thank you for the feedback. If you need further assistance with the product, please log in to MyNETGEAR and click support for additional resources or to contact one of our support experts. We will be happy to help.
Average Rating:(3.0)out of 5 stars11012ratings, based on11012reviews

Great sound quality and works nicely for the internet reach in the house, but wish it had Bluetooth and/or connected to Sirius.

I bought it for work, and I listen to SiriusXM during the day. But it doesn't Bluetooth nor can it connect to SiriusXM via the app.

Otherwise, it is a nice device.

Reviewed by ElisabethElisabeth
Written by a netgear.com customer.
Helpful?
Comment from department -
Hi Elisabeth, Thank you for your review. If you need further assistance, please log in to MyNETGEAR and click support for additional resources or to contact one of our support experts. They will be happy to help. Thank you.
Average Rating:(2.0)out of 5 stars11012ratings, based on11012reviews

No multi room. Really only good as a hub.

Would be much better if multiroom speaker feature worked with this. We all now have many devices and they need to work together. I really wish Netgear would update the software and then let us know so we could really use this device. Right now it's best use as a dumb hub.

Reviewed by JRB ChicagoJRB Chicago
Written by a netgear.com customer.
Helpful?
Comment from department -
Hi JRB Chicago, Thank you for your review. We understand that you have been having a difficult time with the product lately and we would like to look into some of the support opportunities that we have available. Your product comes with a one-year warranty and 90 days of complimentary tech support. If you need further assistance, you can visit Netgear. com/support to register your product, get help, access the latest downloads and user manuals, and join our community. We recommend that you use only official NETGEAR support resources. Thank you.
Average Rating:(5.0)out of 5 stars11012ratings, based on11012reviews

Decent, but no Ethernet backhaul

I bought this on the mistaken assumption that this outdoor extender would have an ethernet backhaul option like the other Orbi satellites that I have. I was mistaken. Only wireless backhaul, which significantly limits placement options. I had even had an ethernet cable run to the intended outdoor location for this unit, only to find out that there's no ethernet port! I strongly suggest that Netgear add an Ethernet port to provide for a consistent experience across Orbi satellites and extenders.

Reviewed by JJustinJJustin
Written by a netgear.com customer.
Helpful?
Comment from department -
Hi JJustin, Thank you for the feedback. We will forward your suggestions to our development team. If you need further assistance, you can visit Netgear. com/support to register your product, get help, access the latest downloads and user manuals, and join our community. We recommend that you use only official NETGEAR support resources. Thank you.
Average Rating:(5.0)out of 5 stars11012ratings, based on11012reviews

Even with fast Internet certain rooms were not connecting good. Once we hooked up the orbi everyone in the house had faster connection. I have four gamers and they are all happy campers. I stream movies and I am always on the internet. I no longer have lagging.

I had been using the same router for last 9 years. I was paying $$ for the better internet speed but performance across my house was “ok” at the best. The day I setup orbi, I upgraded my internet connection without paying anymore $$ to my ISP than what I had been paying. Very happy with the purchase.

I went from slow wifi not being able to stream videos on mobile devices and games on console taking an insane amount of hours to download. Everything is so much faster. Everyone in the household and guests who connect to the wifi see the difference immediately. The satellite is such a cool device for the other side of the house.

The installation of the new Orbi with the App is super easy and take me just minutes to set up the system running. The speed check and the novation of the previous name and password of the old gear also help me and my other family members a lot to surf the Wifi without any disruption.

Decided on the Orbi after kids complaining about the weak internet connection in their bedrooms on the 2nd floor. Especially with online school. I was using a WiFi extender and it wasn't cutting it. Switched to the Orbi and it was like night and day. Tested the speed before and after in my kids room and it went from a 6/9 (download/upload) to 99/120 and I have 100mbps. Installation was easy to follow on the Orbi app. It costs a bit more, but I'm happy with the product.

Will disconnect as you move through space

I've had two daisy chained satellites plus the central mesh system for a year now, and it's been mostly glitchy. I lose my data connection for a few seconds each time I walk through my 900 sqft apartment. The satellites regularly lose connection to smart plugs. HomeKit does not respond to half of my accessories about 50% of the time. Not worth it.

Reviewed by TS-GTS-G
Written by a netgear.com customer.
Helpful?
Comment from department -
Hi TS-G, We appreciate your feedback and we want you to know that your experience is important to us. We are sorry to hear that you had a difficult experience with your product. This resource should help you: https://kb.netgear.com/1110/How-do-I-troubleshoot-my-wireless-network Please let us know if this resolved your issue by updating your review. If you need further assistance, please log in to MyNETGEAR and click support for additional resources or to contact one of our support experts. We will be happy to help. Thank you.
Average Rating:(5.0)out of 5 stars11012ratings, based on11012reviews

Pros and Cons of Orbi

The Orbi is a great system when functioning. I have had issues in he past with disconnection or certain devices (Xbox and HEOS) not connecting at all. Overall it has been very useful in expanding the wifi singnal around my house, but it definitely has its difficulties.