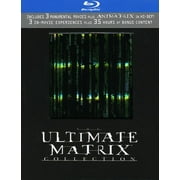 This set gets a PERFECT 10 out of 10 in my opinion. It is the greatest film trilogy ever created, and the 1080P full HIGH DEF picture is AMAZING in all three feature films and Equally, if not more, impressive is the Animatrix also in full 1080P HD. I am watching Matrix Reloaded as I am writing this review and I am able to see details and colors I have never been able to see before. There is so much in the background that I was able to miss in the standard DVD version, and you can just make out everything here! If you have a 1080P full HD TV, then you MUST BUY THIS SET! The price is a bit steep, but if you like action films that are super crispy; then this is the end all be all!

The Matrix Collection In Blu-Ray Is AweSome

I love these movies, and my wife finally caved and got them for me. Great deal here! I've already watched them all and couldn't be more pleased.

Matrix was made to be seen in blu ray !!

i remember back in 1999 seeing the matrix and it confusing me, but i was also 8 years old, and then watching it again a couple months later, it blew my mind. i couldnt believe how good this movie was, the story leaves you judging youre own existence, "am i just a big alkaline battery for robots". then the second and third movie came out and i loved them also ! great stories and action through the roof, and now on blu ray, why wouldnt you buy this ultimate collection. it comes with the matrix, reloaded, revolutions and the animatrix. all in glorious 1080p and amazing audio. the PQ & AQ are great, the matrix made in 1999 was meant to be seen in hi def, perfect picture phenominal sound. watching the trilogy back to back with my brother was a very great weekend, i was very pleased !! and after watching it i still felt that this world was not real, because the wachowski brother did an amazing job in story telling that i actually wondered if im in a computer world ?? if you liked these movies, and have hd tv and sound and blu ray, why arent you clicking add to cart already, COME ON $40.00 is an amazing deal. SO "the question is, will it be the RED pill or the BLUE pill? " 5/5 stars perfect AQ &PQ

this set of blu-ray movies have great special affects, everything is better than what I thought it would be on blu-ray, regular movies do not compair with blu-ray. this is a must have if you are into si-fi movies. the price is right. go ahead and get it today before it is no longer on sale.

I have seen these movies a thousand times, but when I got this blu-ray set it was like it was the first time. Just so much more detail in every scene. Simply amazing!! I wish the extras was in 1080p as well. Oh yeah, I was excited when I first got this set b/c it came with a digital copy of the first matrix. Only to find out that it had been expired for quite some time. Other than that, I will be satisfied with this product for a long time to come.

Upgrade to this, especially at this price $50

The Matrix trilogy is my favorite film series of all time. I had the all of these DVDs purchased at separate times and spent about $55 on them (including animatrix). I wasn't sure the quality upgrade would be worth it, to buy them all over again. I can assure you, I don't even have surround sound, but they ALL look and even sound better in HD no doubt. Plus you get EVERY interview, documentary, TV special they did in between the Matrix and the last two. REALLY WORTH paying for again. I'd even upgrade to 3-D if they ever did that for all 3 of them (because that would be incredible), an actual movie worth the 3-D ticket price. Great Purchase

I have had the matrix collection for some time now and the Blu Ray made it look that much better.

A lot of BANG for your buck!

Got this package at an incredible deal. The movies look awesome in blu-ray. Recommend this to all Matrix lovers.

The Ultimate matrix collection is the best present for people who likes intellectual sci-fi movies. Additional materials are good and gave me more information about what is the matrix.

I'm not big on buying expensive box sets, but this is one I couldn't pass up (granted, it's much cheaper than many of the box sets I've seen). I was a little worried that the quality might not be as good since the first Matrix movie, came out in 1999, before HDTV hit the market, but it really looks as good as any new movie. The special features disk is a DVD, not blu-ray, which is a bit of a disappointment, but not a deal-breaker. All the movies, as well as the Animatrix are blu-ray, with clear images and great color. 35 hours of "bonus footage" is overkill, but it gives you plenty to watch, and you can learn quite a bit about how the movie was made, start to finish, and see how the sets were bult, interviews with the art directors, stunt coordinators, and actors. One more note is that the cover for the box set was attatched with some really weak glue, so it's falling off, leaving a blank, black box underneath. I don't know if it was just my copy, or if that's common. Again, not a deal-breaker, but slightly annoying.

If you're a big action fan, you should definitely add this box set to your DVD or Blu-ray collection(These films are better, by the way, if experienced on Blu-ray). It features all 3 movies in the thrill-packed film saga: The Matrix, The Matrix Reloaded, and The Matrix Revolutions--plus The Animatrix and a bonus disc with features you couldn't find on the first DVD releases of the movies. All these films capture spectacular action combined with a complex story on humanity's raging war against machines. The Wachowski brothers made this one of the most memorable franchises in modern cinema.

BLU-RAY ME CLARITY AND GREAT SOUND. IF YOU LOVED THIS TRILOGY YOU NEED TO SEE IT IN ITS ULTIMATE FORMAT. IT WILL TAKE YOUR BREATH AWAY. AS FOR THE PRICE I AT LEAST SAVED $30.00 OR MORE FROM OTHER STORES AND SITES. SAVE UP AND GET THIS. YOU WILL NEVER REGRET IT. BLURAYKID

This product actually exceeded my expectations based on the "extra" materials provided with the whole set. The additional hours provided give so much more to the plot and story of the whole series. I did not pay full price but this product is a fantastic deal for anything $90 or less.

This is one of my hubby's favorite Triligies.

Bought this as an anniversary gift for my husband and he loved it! Also it is cheaper here than at other electronic stores in fact the price was so low that competitiors would not match it! It is also worth every penny on blu-ray!

I loved the movies and had them on dvd but blu-ray is the best. Great sound and super resolution on the screen. In 1080 you dont miss anything.

my husband loves it!!! very good quality. recommend this to other matrix fans...

Was a Christmas gift and recipient was thrilled to have this complete collection.