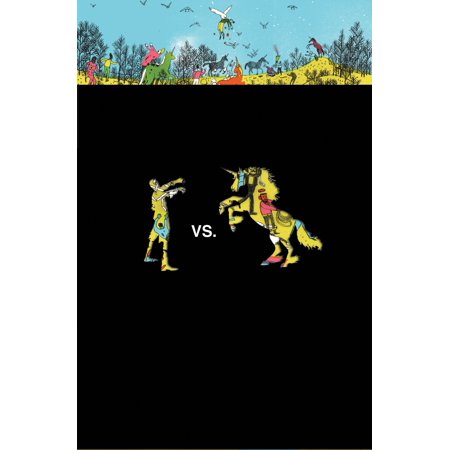 In the age old (according to editors Black & Larbalestier) quest for the answer to which is cooler, brain eating zombies or rainbow farting unicorns, twelve renowned authors have taken up sides and presented stories in support of their choice. 1. The Highest Justice, by Garth Nix: An eerie tale of murder and high intrigue in a fairy tale setting. 2. Love Will Tear Us Apart, by Alaya Dawn Johnson: A high school zombie struggles to choose between competing desires. 3. Purity Test, by Naomi Novik: A teen encounters the usual assortment of unicorns, trolls and evil wizards while hanging out in Central Park. 4. Bougainvillea, by Carrie Ryan: Carrie brings her considerable imagination to bear to give us her spin on the classic Caribbean governor's daughter meets zombies tale. I enjoyed this much more than I did Forest of Hands & Teeth. 5. A Thousand Flowers, by Margo Lanagan: A touching and very unusual love story. 6. The Children of the Revolution, by Maureen Johnson: A tongue in cheek exposé of the truth behind that beautiful celebrity couple and all their adopted children. 7. The Care and Feeding of Your Baby Killer Unicorn, by Diana Peterfreund: A fascinating tale where unicorns are less the stuff of dreams than of nightmares. 8. Inoculata, by Scott Westerfeld: A classic zombie tale with an element of Mad Max thrown in. I guess that comes from being married to an Aussie. 9. Princess Prettypants, by Meg Cabot: It's a good thing this is a story in an anthology. There is no way I would be caught dead with a book with this title on the cover. That said, this is a surprisingly entertaining story of a 17 year-old girl who doesn't get the car she wanted for her birthday. 10. Cold Hands, by Cassandra Clare: A classic romance with a dash of murder intrigue and undead thrown in. 11. The Third Virgin, by Kathleen Duey: And I thought serial killers were a uniquely human phenomenon. This one is fascinating and very original. 12. Prom Night, by Libba Bray: In a bleak world where all adults have turned into undead, the remaining teens struggle to retain a tenuous hold on normality. All of the stories are entertaining (not a stinker in the lot) a couple of the unicorn tales give off a hint of saccharin and one or two of the zombie stories tend to shamble a bit. My three favorites (Bougainvillea, Children of the Revolution & Cold Hands) just happen to all be zombie tales so I guess that if I were the judge, I'd have to side with the undead. I still don't think I'd let my daughters date one, though.

I have never reviewed ...

I have never reviewed an anthology, so I really don't know where to begin. I guess I will start off by saying that I usually do not like short stories, or reading a book of short stories all at one time. I usually grow bored with them. I like to have lots of character development and plot building and you just can't do that in short stories, but I am happy to say that I did not grown bored with this book. Every single author in the book is fantastic and their stories were fantastic as well. I was planning on naming my favorite zombie story and my favorite unicorns story, but as I look back through them, I just can't pick! I'll try to touch on a few of my favorites. I think my favorite was definitely Cold Hands by Cassandra Clare. This story was amazing! I want it to be the start of a new series! Forget about the Mortal Instruments, this was more awesome than those. (Yes I did just say that!) The world she creates in this story has endless possibilities and I wish we could explore them all. The characters were fantastic and Cassandra really made you feel their love for each other even though it was short. If you read one story in this anthology make it this one! Inoculata by Scott Weterfeld was also fantastic. It's another one that I wish was the beginning of a new series or book. I loved the idea of his 'cure' and the ending left you wanting more. I have never read anything by Meg Cabot so I didn't know what to expect when it came time to read Princess Prettypants. The name alone is terrifying, but the story was great! How can you go wrong with a unicorn that farts rainbows? I also love The Children of the Revolution by Maureen Johnson. It was funny and eerie at the same time. It was a lot of fun. I, of course, loved The Care and Feeding of Your Baby Killer Unicorn by Diana Peterfreund. I'm a huge fan of the Killer Unicorn series, so I was excited to read this one, and I was happy to see that it was about the back story of the new character that shows up in Ascendant. I can't wait to learn more about her! Those are only my favorites. All the stories were good. Another thing that made the book awesome were the introductions (a.k.a. arguments) between Holly and Justine! They made me laugh many times. And have you saw this book in person? Its amazing! The artwork and design are so detailed! I highly suggest that you read this book! Especially if you are a fan of any of these authors. But what you really want to know is which team, right? Going into this book I was team unicorn, but now I'm not so sure. Do I have to pick?

Cool cover, awesome title and even better collection of original short stories by some hot YA writers. The banter between the editors at the beginning of the book and before each story is also quite funny. I started this anthology with a preference for unicorns (I'd been one of those kids) and I must admit that I actually liked the zombie stories better over all. In real life, I'd still stick with unicorns (even the killer ones), but this collection has given me a new perspective on zombies. Especially, zombie love (in particular, "Love Will Tear Us Apart" - seriously, macaroni and cheese!).

I started the first st...

I started the first story 3 times before I could get past the first half. After that, I couldn't put this book down! The stories are interesting and funny (except for A Thousand Flowers...gah!), and I absolutely love it! The commentary is a little cheesy though, but it can be skipped :D

I debated for a good long time whether to review this book as a whole, or to break it into story components like I've seen a few others do. I finally decided to just do a general review. After all, half the fun of diving into a compilation like this is discovering each story for yourself! I wouldn't want to take that away from my dear readers. So instead, I'll try to explain what I love overall. Shall we? Let me start out by saying that I don't generally read many anthologies. As a reader, I'm big on being able to connect with my characters and their lives. I want to feel invested in them as I follow them throughout the story. Anthologies make that a bit difficult to do, since the authors are limited to a short story and therefore limited in the amount of character building that they can do. Make sense? Okay, now take everything that I just said and throw it out the window. Yup, I'll wait. Toss it right out. This book made me 100% love anthologies and I only hope that there are more out there like this! Each story in Zombies vs. Unicorns opens with banter between Holly and Justine, and that in itself is pure fun! I enjoyed all the stories in this anthology so very much, that it's impossible for me to declare a favorite. However I will say that Maureen Johnson's zombie children gave me some crazy dreams! Some of the stories are slightly disturbing. Some of them will have you giggling maniacally and then wondering why on Earth everyone is staring at you. You might think I'm kidding but I warn you, don't read this book on the bus. (Unless of course you're on a bus full of crazy people, in which case you'll blend right in.) The swap between zombie and unicorn themed stories keeps the book light and moving, and I read straight on through until the end! In an effort not to ramble on about my love for this book, I'll wrap it up here. Suffice it to say that if you enjoy zombies or unicorns, or "zombicorns" (zombie/unicorn hybrids that a friend and I fully support) then you will enjoy this anthology immensely! The sheer talent on the contributing writers makes it hard to choose what side you are truly on. I've debated this deep question and I think I've come up with an answer. Yes friends, overall I'm Team Zombie. Celebrate or throw tomatoes as you wish, then get down to your local bookstore and pick up a copy of Zombies vs. Unicorns!