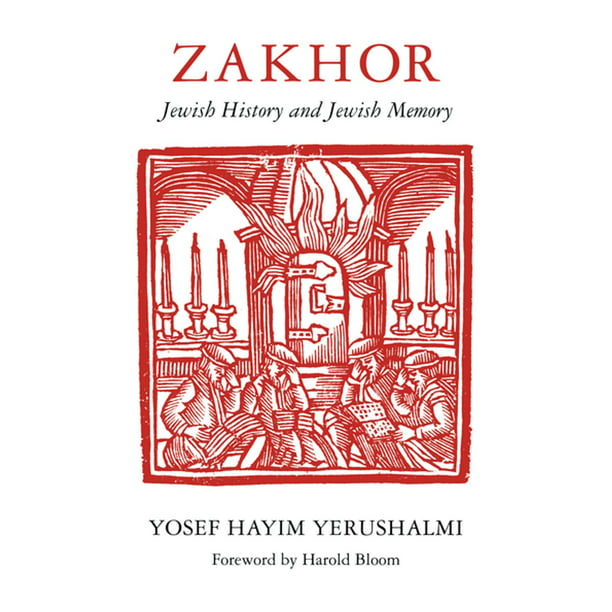 “Mr. Yerushalmi’s previous writings . . . established him as one of the Jewish community’s most important historians. His latest book should establish him as one of its most important critics. Zakhor is historical thinking of a very high order - mature speculation based on massive scholarship.” - New York Times Book Review

Zakhor by Yosef Hayim Yerushalmi A unique meditation on the role memory, forgetting and history plays in the life of the Jewish people. From the Torah to the Spanish Inquisition and the assimilation of German Jews, Yerushalmi illustrates how the Jewish people celebrate their own story and the tragedies that befell them. His broad interest even entails a brief summary of a strange short story (Funes, the Memorist) written by the great Argentine writer, Jorge Luis Borges. A brief book with a lasting memory of its own.

This is a collection o...

This is a collection of essays on Jewish history and Jewish memory. One of Yerushalmi's primary points is that "history" as we think of it now is nothing like it was in the pre-modern era. There were hardly any literate people at any rate to write it. The Bible was the primary "historical" document for a long time, but it was constructed for, and viewed as, a "revealed pattern" of God's plan for all time. Modern history as we know it today did not begin until the Enlightenment. Prior to that, there wasn't much need for histories, except to glorify battles in order to solidify political power; divine providence caused whatever happened, and it happened in a way to confirm religious expectations. God's very introduction to the Jews was framed in historical terms: "I the Lord am your God who brought you out of the Land of Egypt, the house of bondage." As Yerushalmi contends: "For here as elsewhere, ancient Israel knows what God is from what he has done in history. And if that is so, then memory has become crucial to its faith and, ultimately, to its very existence." To write history in a secular, fact-based manner would be heretical. Thus, with the Jewish bible, for the first time the history of a people became part of its sacred scripture. Recitation of that history became an affirmation of faith. Moreover, with the closing of the biblical canon, there was no longer a need to write any more history. Once the pattern had been revealed by the bible of the whole of history, of what importance were further details? Yerushalmi dates the rise of "modern" history with the rise of secularization, nationalism, and the growth of the Enlightenment. A condition for the emancipation of the Jews was that "they cease to regard themselves as a nation and redefine themselves in purely religious terms." The Jews had a history bound up with their identity as a nation, whereas Christians embraced history in terms of individuals. This meant coming up with a whole new approach to "history." Importantly, it also meant that modern Jewish historiography repudiate premises basic to Jewish conceptions of history in the past. Evaluation: I'm quite sure I have not done justice to the arguments advanced by Yerushalmi. They are complex, thought-provoking, and intellectually stimulating. I recommend this small collection especially for all those interested in postmodern conceptions of history and memory.