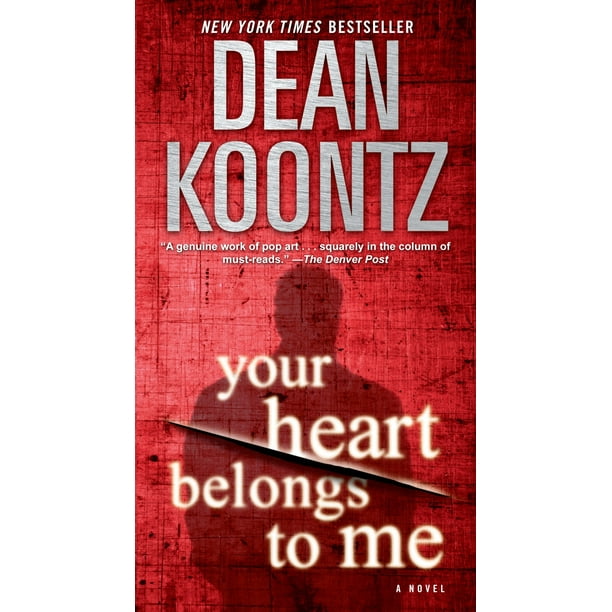 Your Heart Belongs to Me : A Novel

We aim to show you accurate product information. Manufacturers, suppliers and others provide what you see here, and we have not verified it.
From the #1 "New York Times"-bestselling master of suspense comes a riveting thriller that probes the deepest terrors of the human psyche--and the ineffable mystery of what truly makes us who we are. Now available in a tall Premium Edition.
For one man, they are the five most terrifying words of all . . .

One year after the heart transplant that saved his life, thirty-five-year-old Ryan Perry has never felt better. He’s getting back everything he nearly lost forever—his business, his his life, and, with luck, his beloved girlfriend. Miracles do happen.

Then the unmarked gifts begin to arrive—a box of candy hearts, a heart pendant. Most disturbing of all is a graphic heart-surgery video and its chilling message: Your heart belongs to me. Ryan is being stalked by someone who feels entitled to everything he has. She’s the spitting image of the twenty-six-year-old donor of the heart beating steadily in Ryan’s own chest. And she’s come to take it back.

Few bestselling genre writers are willing to stray from their proven formula as much as Koontz, especially now with their publishers facing increasing financial pressure to stamp out novels from a familiar mold. Koontz, however, is a poetic genius trapped in a thriller writer's body, and I respect the tragic tack he takes in Your Heart Belongs to Me. The core mystery/thriller elements are here, as Koontz hands a dotcom millionaire Ryan Perry a medical death sentence and keeps us wondering whether he's the victim of a conspiracy or his own paranoia. But unlike the heroes in some of his more traditional thrillers like The Good Guy and The Husband, Ryan faces a threat that arises as much from his own tragic flaw as from an independently-motivated villain. Laced with allusions to The Raven and other works by Poe, there's a suspenseful creepiness to this tale that goes well beyond what most medical mysteries can achieve. There's also a compelling love story between these covers, with an arc tracing Ryan's dark journey of self-discovery. And as Ryan discovers the evil wrought by his own tragic moral shortcomings, the stakes seem higher than life or death, as if his very soul hangs in the balance. Despite this novel's many strengths, I found Ryan less developed and believable than most Koontz heroes, making some of his decisions toward the end of the story hard to fathom. I also felt that the supernatural element of the book detracted from its power (a rarity for a Koontz novel, to be sure), as this mystery could have been just as creepy, but more compelling, without resorting to the ghost device. Graded on a Koontz curve, I give this four stars, bearing in mind that it would probably merit five stars from most any other writer.

Reviewed by KevinJosephKevinJoseph
Written by a librarything.com customer.
Helpful?
Average Rating:(5.0)out of 5 stars

Your Heart Belongs to ...

Your Heart Belongs to Me is about a 34 year old internet entrepreneur, Ryan Perry. He learns of a terrible medical condition that limits his life to a year if he doesn't receive a new heart. The first thing Ryan does is begin to search for an answer about his condition. Years later, Ryan is visited by a woman claiming that she wants her heart back. And she's willing to use violence to get it. I loved this book! It had romance, it had drama and mystery. Koontz's use of the English language is AMAZING! I listened to the unabridged version of this book and the reader was incredible as well. The beginning of the book is a little slow, but the relationship that is painted so vividly between Samantha and Ryan is interesting. Their conversations almost always got a laugh out of me! I loved the way that they spoke to each other, and the quick wit between them. This book was not at all what I expected and that is a great compliment. There are a few complexities in the book, so I think that if I read/listened to it again, I might gain even more from it.

Reviewed by kysmom02kysmom02
Written by a librarything.com customer.
Helpful?
Average Rating:(4.0)out of 5 stars

A young, thirty-something self-made millionaire, finds out that he has a heart disease and is given one year to live and put on the heart transplant list. He starts to become paranoid, wondering if someone has done this to him. Time goes by and he is finally found a donor but he is now having strange dreams and wonders what is real and what is not. This is the first Koontz book I have read. I was under the impression he wrote horror books but this is nothing near a horror story. But instead it is a deep character study of a man and his brush with death and the slightly paranormal. This is also a story of redemption and finding your real inner self. I also found the theme quite religious, as a man slowly learns to hear God's voice so that he can in turn listen to it and react. The plot moves slowly through the first part of the book as we learn about the characters and their day-to-day lives. The action becomes faster in the second part and moves on to a page-turner ending. While I figured out the twist early on in the book I still found the unravelling and final climax a fascinating read. I've always wanted to read this author and this book makes me want to read him more. I'm interested to see how this compares to his horror stories.

Reviewed by ElizaJaneElizaJane
Written by a librarything.com customer.
Helpful?
Average Rating:(4.0)out of 5 stars

Ryan heart has failed and at 34 he has found himself on a waiting list for a new one. Impatience for life gets the better of him and he searches for a new doctor. Dr. Hobbs finds him a heart in record time and the transplant is a success. A year later things begin to happen to him that make him wonder if it was all worth it. This is a book filled with love suspense, danger and a little Poe thrown in for good measure. This is not my favorite Dean Koontz book but it is not bad either. I think that it was a little slow on the upstart but the ending was fast paced and well worth the reading of the rest of it. The subtext of this book is that you can't buy life you just have to live it and let it be as it should be. I would recommend it to anyone who likes fantasy, romance, horror, and drama. I bought this book from a used book store.

Reviewed by sallyawolfsallyawolf
Written by a librarything.com customer.
Helpful?
Average Rating:(3.0)out of 5 stars

Dean Koontz is one of my favourite authors, however 'Your Heart Belongs To Me' was a little different to his usual style. The first half of the book seemed to just 'cruise' along without too much drama however it was overflowing with too many descriptives. This style of writing from Koontz made me wonder if he was experimenting with a new style, and I'm sad to say I prefer his regular (and brilliant) writing style. The descriptives, metaphors and similes in this novel were weak and didn't add much to the building of the story line or the characters. It also seemed to be a little out of character for the author. It wasn't until I passed half way through the novel that I experienced my first round of 'goose bumps' and the novel suddenly became a rollicking good read for me. The improved pace continued to a reasonably satisfactory conclusion, however I believe this novel could have benefitted from a further edit. 'Your Heart Belongs To Me' had me on the edge of my seat for many chapters and I was swept up in the mystery, however I think it had much more potential for greatness that unfortunately wasn't fully realised. Nevertheless, I really enjoyed this book.

Reviewed by Carpe_LibrumCarpe_Librum
Written by a librarything.com customer.
Helpful?