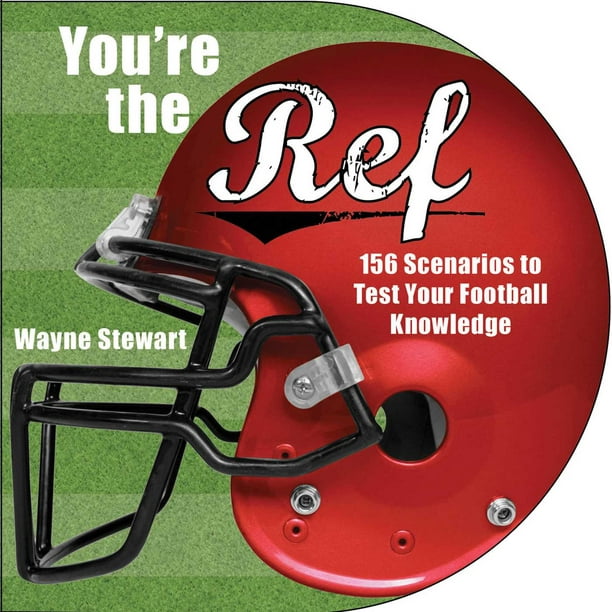 You're the Ref : 156 Scenarios to Test Your Football Knowledge

We aim to show you accurate product information. Manufacturers, suppliers and others provide what you see here, and we have not verified it.
When you watch football games, do you feel as if you know as much--maybe more--than the actual refs? Here's your chance to prove it, with Wayne Stewart's You're the Ref. You're the Ref, first published in 2011 and now newly revised, is divided into five exciting sections covering all three phases of the game--offense, defense, and special teams. From basic holding and pass interference calls to more complicated rules such as roughing the kicker, illegal touching and those governing fumbles, it examines just about every scenario that could unfold on a football field. Most of the situations in this book come from real games--many that diehard fans will be sure to remember--so don your zebra stripes, grab your whistle, and take your position in the offensive backfield. After all, you're the ref! Skyhorse Publishing, as well as our Sports Publishing imprint, are proud to publish a broad range of books for readers interested in sports--books about baseball, pro football, college football, pro and college basketball, hockey, or soccer, we have a book about your sport or your team. Whether you are a New York Yankees fan or hail from Red Sox nation; whether you are a die-hard Green Bay Packers or Dallas Cowboys fan; whether you root for the Kentucky Wildcats, Louisville Cardinals, UCLA Bruins, or Kansas Jayhawks; whether you route for the Boston Bruins, Toronto Maple Leafs, Montreal Canadiens, or Los Angeles Kings; we have a book for you. While not every title we publish becomes a New York Times bestseller or a national bestseller, we are committed to publishing books on subjects that are sometimes overlooked by other publishers and to authors whose work might not otherwise find a home.
Do you think you have what it takes to be a major college or pro football referee? Well now you can test your knowledge of the game with Wayne Stewart’s You’re the Ref.

You’re the Ref is divided into three exciting sections. Routine Calls” deals with scenarios and rules which typically come up in games and deals with clear cut rulesout of bounds calls, holding, pass interference. Basic Situations” deals with matters and rules that are just a bit more unusual or, for the casual fan, more obscureillegal man downfield, for example, isn't a call you see every game, but it remains a rule that referees and many fans know quite well. In the final section, you can put your knowledge to the test. You’ll be presented with what many football people call knotty” problems. Here you will be asked questions involving the complex tuck rule,” the difference between roughing and running into the kicker, and other arcane matters.

Most of the situations in this book come from real games, but some scenarios are made up to illustrate specific points or rules. You’re the Ref is the ultimate test of your refereeing skills and knowledge.