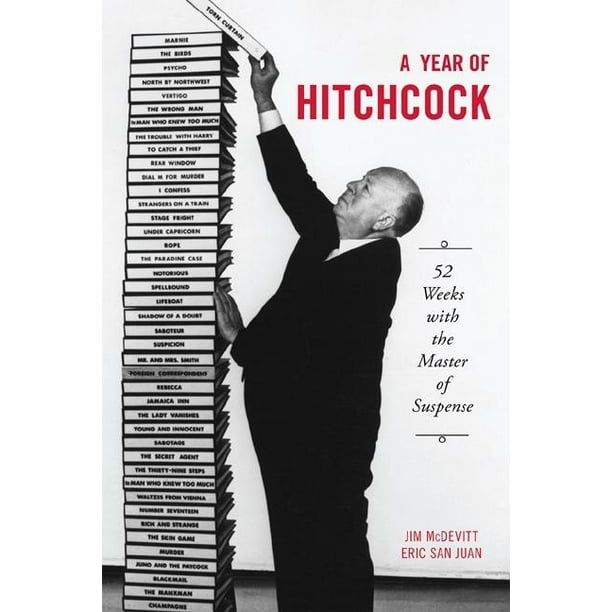 We aim to show you accurate product information. Manufacturers, suppliers and others provide what you see here, and we have not verified it.
This book analyzes 68 works directed by Hitchcock--including notable silents, all of his films from the early 1930s on, the two French propaganda shorts from WWII, and episodes of his television program--assessing his development as an artist. Each analysis is supplemented by key film facts, trivia, awards, a guide to his cameos, and a listing of available DVD releases.Alfred Hitchcock's career spanned more than five decades, during which he directed more than 50 films, many of them indisputable classics: Notorious, Strangers on a Train, Rear Window, Vertigo, North by Northwest, and Psycho, among others. In A Year of Hitchcock: 52 Weeks with the Master of Suspense, authors Jim McDevitt and Eric San Juan provide a comprehensive examination of Hitchcock's film-to-film development, spanning from the beginning of his career in silents to his final film in 1976, including his work on two French propaganda shorts he directed during World War II and segments he directed for Alfred Hitchcock Presents. Organized into 52 chapters and arranged in chronological order, the book invites readers to spend a year with the director's most notable works, all of which are available on DVD. Each film is examined in the context of Hitchcock's career, as the authors consider the themes central to his work; discuss each film's production; comment on the cast, script, and other aspects of the film; and assess the film's value to the Hitchcock viewer. From The Lodger to Family Plot, 68 works directed by Hitchcock are analyzed. Each analysis is supplemented by key film facts, trivia, awards, a guide to his cameos, a filmography, and a listing of available DVD releases. Whether readers decide to undertake the journey through his films one week at a time or pick and choose at their discretion, A Year of Hitchcock will open the eyes of any viewer who wants to better understand this director's evolution as an artist.