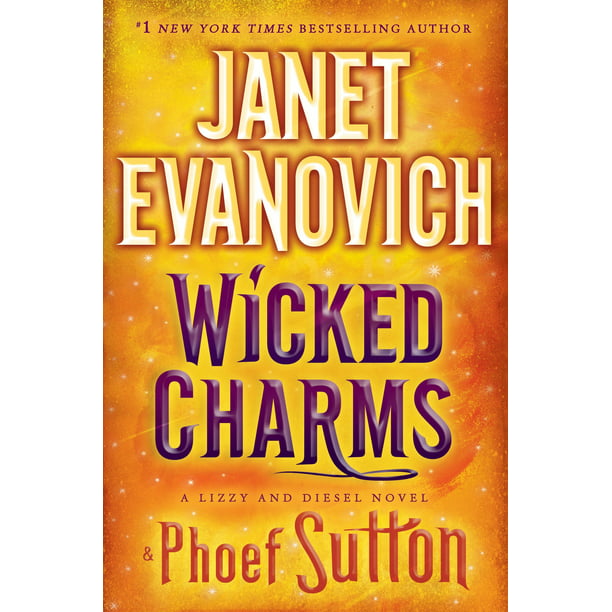 We aim to show you accurate product information. Manufacturers, suppliers and others provide what you see here, and we have not verified it.
"A mystery with a paranormal twist, the third book in the New York Times bestselling Lizzy and Diesel series from Janet Evanovich, and new co-author Phoef Sutton. Lizzy and Diesel are back for more, with a new problem to solve. Ever since Diesel came into Lizzy's life, things have been anything but quiet, and this is no exception--Lizzy must help Diesel protect the Seven Stones of Power, again!"--NEW YORK TIMES BESTSELLER

Lizzy and Diesel are back in an all-new wicked adventure from Janet Evanovich and Emmy Award–winning co-author Phoef Sutton.

Before he was murdered and mummified nearly a century ago, notorious bootlegger Collier “Peg Leg” Dazzle discovered and re-hid a famous pirate’s treasure somewhere along the coast of New England. A vast collection of gold and silver coins and precious gems, the bounty also contains the Stone of Avarice—the very item reluctant treasure seeker Lizzy Tucker and her partner, Diesel, have been enlisted to find. While Lizzy would just like to live a quiet, semi-normal life, Diesel is all about the hunt. And this hunt is going to require a genuine treasure map and a ship worthy of sailing the seven seas . . . or at least getting them from Salem Harbor to Maine.

Greed is eternal and insatiable, and Lizzy and Diesel aren’t the only ones searching for the lost pirate’s chest. People who have dedicated their entire lives to finding it are willing to commit murder or make a deal with the devil just to hold the fortune in their hands. One of those people may even be Wulf, Diesel’s deceptively charming and enigmatic cousin. Wulf desires the Stone of Avarice. He also desires Lizzy. It’s hard to say how far he’s willing to go to gain either one.

Wicked Charms is a swashbuckling adventure full of raiders, monkeys, minions, and mayhem. Lizzy and Diesel are going to have to do everything they can to keep their heads above water and hope they’re living a charmed life.

“Delivers what Evanovich’s readers have come to expect: laughs, oddball situations, quirky supporting characters, and a dash or two of romance.” —Examiner.com

Wicked Charms is incredible. It's a fast pace treasure hunt, with romance, magic, and betrayal. I couldn't put it down, every page pulled me deeper into the world of Lizzy & Diesel. Lizzy is a headstrong woman who has to save the world with her magical abilities and a pastry bag. Diesel is her partner who is wicked charming and has no problem with saving the world every other day. Wicked charms is about: A bootlegger Collier "Peg Leg" Dazzle who more then ninety years ago hid a treasure that not only was vast but it included a Stone of Avarice. Lizzy and Diesel need to find the stone before a crazed millionaire, a demon cult, an insane historian, and Diesel's cousin Wulf beat them to the stone. They also have to make sure to not let the demon mammon of greed awaken and take over the world with the power of the stone of avarice. Will Lizzy & Diesel be able to save the world.... Well you'll have to read to find out. Hope you enjoyed this as much as I have!

I was thrilled when th...

I was thrilled when the publisher gave me the opportunity to review an ARC of this long-awaited follow-up to Wicked Appetite and Wicked Business. Avid Evanovich fans should appreciate the Lizzy and Diesel novels, since they use the same basic formula used in the Stephanie Plum series. Ordinary young woman (albeit this one has special "powers"), prone to mishaps and minor disasters, hangs out with mysterious hunk and the two embark on a series of slapstick comical adventures. Like the two previous books, Wicked Charms takes place in Massachusetts - much of it in Salem, which lends itself nicely to the magical aspect of the book. It also gives the authors some opportunity to add some seafaring-type escapades. While touring a local pirate's museum, Lizzy Tucker knocks over a "prop" skeleton and uncovers the actual mummified remains of legendary pirate, Peg Leg Dazzle. From there they learn of Peg Leg's famous hidden treasure. Lizzy and Diesel are off to follow the clues and discover the coins, gold, silver, gems and famous Stone of Avarice. With the help of Lizzy's friends, Glo, Clara and Josh, they battle against the villainous Martin Ammon, who may or may not be a demon. Wicked Charms is like most other Janet Evanovich novels. It follows a formula that works. Either you're a fan or you're not and I'm definitely a fan. Ms. Evanovich's books aren't meant to be literal true to life accounts - they're written to be tongue-in-cheek, entertaining, engaging fun. And Wicked Charms delivers just that. I would recommend Wicked Charms if you're looking for an easy, breezy and funny read. Hopefully, Janet Evanovich will continue to provide us with many more books with less time in between publication in the future.

Reviewed by ebookreviewgalebookreviewgal
Written by a librarything.com customer.
Helpful?
Average Rating:(5.0)out of 5 stars

I received an ARC from...

I received an ARC from NetGalley in exchange for an honest review. Finally! I waited and waited and waited for this next installment of Lizzy and Diesel to come out, and I was absolutely not disappointed! This series just keeps getting better and better. This story had everything I was waiting for, laugh out loud witty and hilarious dialog, a mystery to solve, romance heating up between Lizzy and Diesel, paranormal ridiculousness, a slew of crazy characters (including Carl the monkey),and my favorite part Wulf. He reminds me of a less evil Loki (Tom Hiddleston). Can't wait for the next in the series. Hopefully not as long of a wait as this one.

Reviewed by sasmith361sasmith361
Written by a librarything.com customer.
Helpful?
Average Rating:(4.0)out of 5 stars

Wicked Charms continues the adventures of Lizzy & Diesel. Full of fun and comical moments, Wicked Charms is an easy read that is hard to put down with a great story of pirates, demons, and magic. Though the ending is a little interesting with a character's personality changing from what is read as a strong character throughout the book to someone whom is unsure of himself.

ARC provided by the Pu...

ARC provided by the Publisher via NetGalley in exchange for an honest review.I love the Janet Evanovich books. They are all fun, yet each series is very different. In this series, Lizzy Tucker is a baker in Salem. She has a couple of gifts, one is to bake magic cupcakes, the other is to sense the seven Saligia Stones. Along comes Deisel, who's job it is to recover the stones and destroy them so no one has their power. This is the third book in the series.In this story, Lizzy and Diesel are trying to recover the Avarice Stone (greed). Martin Ammon is also trying to recover the stone. He believes he is the Demon god Mammon. Of course Wulf, Diesel's cousin is also in the hunt. There is a treasure map that can only be read using a coin that has been cut up into 8 pieces. Once Lizzy and Diesel find all the pieces, they are able to begin the search for the Stone. AS well as the stone, there is a treasure worth millions of dollars at stake. While all this is going on, Lizzy and Diesel are developing a relationship that could result in one of them losing their powers. There is a lot of sexual innuendo and some murders along the way, but it is a fun read.As in any Janet Evanovich book, you have a cast of incredible supporting characters. Here we have Glo, a witch in training with Broom and a Magic 8-ball, Josh, a Buccaneer American, Martin Ammon, psycho eccentric billionaire with big delusions of owning the world and lots of others.