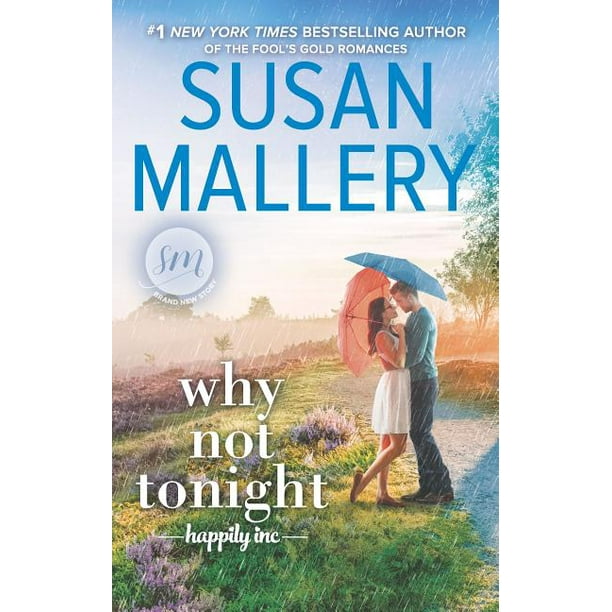 Happily Inc, 3: Why Not Tonight (Paperback)

We aim to show you accurate product information. Manufacturers, suppliers and others provide what you see here, and we have not verified it.
Susan Mallery welcomes you to Happily Inc, where true love isn't just for fairy tales... Natalie Kaleta will do anything for the artists at her gallery, including risk life, limb and the effect of humidity on her naturally curly hair. Braving a downpour to check on reclusive Ronan Mitchell, Natalie gets stranded by a mudslide at his mountain home, where the brooding glass artist reveals his playful side, sending her inconvenient crush from under-the-radar to over-the-top. After a secret tore apart his family and made him question his sense of self, Ronan fled his hometown for Happily Inc, but the sunny small town can't fix his damaged heart. He won't give in to his attraction for beautiful, perpetually cheerful Natalie. She's untouched by darkness--or so he thinks. Natalie knows that when a heart goes through the flame, it comes out stronger. Life may not be a fairy tale, but sometimes dreams do come true. Why not this one? Why not tonight?

Why Not Tonight (Happily Inc) is about Ronan and Natalie. Natalie wears glasses and has a contagious personality. I loved her honesty as well. This book is an easy read and very enjoyable. Not sure how Susan manages to catch your attention in her books. When I stop reading, I am constantly wondering what happens next. This is such a great book!!!

When we first met the Mitchell Brothers back in Fools Gold, I always had a feeling that Ronan was going to be my favorite of the bunch. With this latest story set in Happily Inc. I found out I was right. Often misunderstood, moody and reeling after his life was turned upside down, I knew it was going to take a special person to make Ronan see that he wasn't his past, that he could be anyone he wanted to be. I fell in love with Natalie right away. Quirky, funny and honest to an embarrassing fault, Ronan never saw her coming. She actually reminded me a lot of Felicia, from Fool's Gold and I would love to see them have some sort of interaction in the future. I loved that as artists Ronan and Natalie understood each other in ways that others hadn't before and her interaction with all of the artist brothers were some of my favorite parts of the story. Natalie's background touched my heart and I fully related to her desire for a family of her very own, to simply belong. Why Not Tonight brought the Mitchell's together for some fun and family time for which I was grateful to catch up on their lives. Mallery's tradition of featuring past community characters is one of my favorite parts of all of her stories. No one does it better and this book is no exception.

I have been waiting fo...

This is the third book...

This is the third book in this series. The series has gotten better with each book. I really have grown close to the characters and the town of Happy. The brothers, Mathias, Nick, and Ronan are great. I like that while, each one has been in the spotlight, they are still featured together in some way in the books. Instantly, I loved Natalie. She had spunk. This spunk is what broke down Ronan's walls and brought him back into the "world". They were so good together. Natalie's joy was so infectious; especially over her new red car. I like Ronan just wanted to keep Natalie happy. While, Ronan had a tough exterior shell, he was still very likeable. The only question you have to ask yourself is "why not tonight" pick up a copy of this book and treat yourself to laughs, love, and engaging characters.