Light filtering louvers provides light control while creating privacy. Vertical blind is an ideal window covering product for large windows and patio doors. Featuring cordless operation with a tilt wand function, this blind boasts a child-safe design, it can be easily fixed and adjusted to suit your

We aim to show you accurate product information. Manufacturers, suppliers and others provide what you see here, and we have not verified it.
Features
Light filtering louvers provides light control while creating privacy. Vertical blind is an ideal window covering product for large windows and patio doors. Featuring cordless operation with a tilt wand function, this blind boasts a child-safe design, it can be easily fixed and adjusted to suit your requirements. Hardware and instructions included. Easy installation, just a few minutes to complete. No. 603524: Width: 78 In., Length: 84 In., Color: White, Material: Vinyl, Louver Size: 3.5 In., Pkg Qty: 1, Package Type: BoxWhole Space Home Impressions Light Filtering Vertical Cordless Blind 2 Pack
Specifications 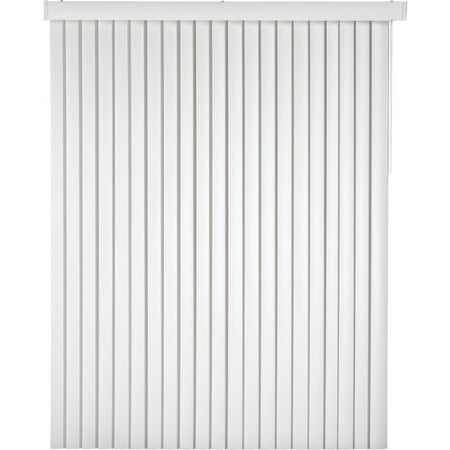 These look great and compared to others I found were reasonably priced. The floor on my back porch apparently was uneven so I had to cut the bottom of a few pieces which was easy to do.

It was very easy to put up by myself

Very nice and well made

These were very nice easy to install

Arrived ahead of schedule. Easy to install. Looks real good. Filters light to translucent. Just what we needed.

This was a set of two vertical blinds to fit a french door. When the package was opened (thought I had purchased one set of a better quality judging by price) is when I discovered it was two sets. Oh well, just keep them. Opened the first set to put up and found the first strip broken, no issue, was cutting them off anyway, couldn't get the exact length I wanted, simply flip ends. Pulled out second strip, third and found them broken as well. Checked the box, all were broken. Second box, use it. Found the strips in that box to be broken, as well. Had to return and purchase new ones. Trying a different supplier.