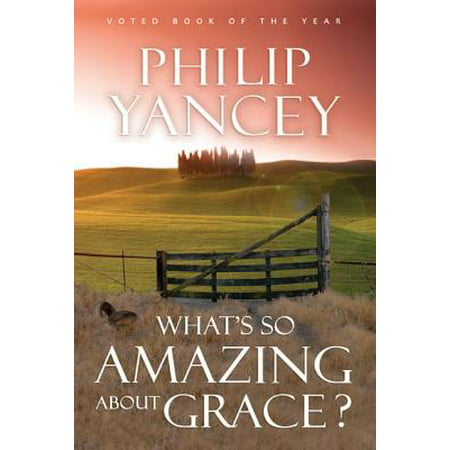 What's So Amazing About Grace? - eBook

In 1987, an IRA bomb buried Gordon Wilson and his twenty-year-old daughter beneath five feet of rubble. Gordon alone survived. And forgave. He said of the bombers, "I have lost my daughter, but I bear no grudge. . . . I shall pray, tonight and every night, that God will forgive them."His words caught the media’s ear--and out of one man’s grief, the world got a glimpse of grace.Grace is the church’s great distinctive. It’s the one thing the world cannot duplicate, and the one thing it craves above all else--for only grace can bring hope and transformation to a jaded world.In What’s So Amazing About Grace? award-winning author Philip Yancey explores grace at street level. If grace is God’s love for the undeserving, he asks, then what does it look like in action? And if Christians are its sole dispensers, then how are we doing at lavishing grace on a world that knows far more of cruelty and unforgiveness than it does of mercy?Yancey sets grace in the midst of life’s stark images, tests its mettle against horrific "ungrace." Can grace survive in the midst of such atrocities as the Nazi holocaust? Can it triumph over the brutality of the Ku Klux Klan? Should any grace at all be shown to the likes of Jeffrey Dahmer, who killed and cannibalized seventeen young men?Grace does not excuse sin, says Yancey, but it treasures the sinner. True grace is shocking, scandalous. It shakes our conventions with its insistence on getting close to sinners and touching them with mercy and hope. It forgives the unfaithful spouse, the racist, the child abuser. It loves today’s AIDS-ridden addict as much as the tax collector of Jesus’ day.In his most personal and provocative book ever, Yancey offers compelling, true portraits of grace’s life-changing power. He searches for its presence in his own life and in the church. He asks, How can Christians contend graciously with moral issues that threaten all they hold dear?And he challenges us to become living answers to a world that desperately wants to know, What’s So Amazing About Grace?

What's So Amazing About Grace? - eBook

Last summer at Camp Me...

Last summer at Camp Meeting, Lonnie Melashanko said, "If you read only one book this year, I recommend 'What's so Amazing About Grace' by Philip Yancey." So Karen chose it for bok discussion group. She specifically chose it for this date because Yancey was speaking at Congress in Boston and several of us were going to hear him. He was excellent and after his talk, I was able to get the book signed. I expected the book to be mostly about God's grace to us - and it was. But the majority of the book also dealt with our grace towards other people. It was a message Adventists certainly need to hear After reading the book, however, I realize this is a lesson people in all conservative religions need to hear. Yancey starts the book with the story of a prostitute who sells her young daughter as a prostitute to get money to live. Someone asks her why she doesn't attend church and she responds, "Church! Why would I want to go there? i already feel bad enough about myself - they would only make me feel worse." Yancey asked the question - what has happened to the church - in Jesus day, prostitutes flocked to Jesus but no longer feel welcomed by his followers. He says he himself left the church because he did not find grace there, but he returned because he did not find it elsewhere. He discusses the strict rules of his Bible College and how they defended cultural decisions with unrelated Bible texts as if they were moral issues. He says he wrote an article about sympathy for those in pain and many people wrote to him saying pain was a punishment from God. He says he "yearns for the church to become a nourishing culture of grace."

Brilliant book. Perhaps the best Christian book I've ever read. It helps me feel more comfortable with some of the 'radical' ideas I have about the state of today's Christianity--ideas that I've struggled with for years.

Serving God joyfully and wholeheartedly is only possible when we understand the depth of His love for us, the depth of His grace. In the book, "What's So Amazing about Grace?", Phillip Yancey points out its shocking nature - grace cost Jesus everything....and costs us nothing. We don't deserve it, we cannot earn it, and we are completely unable to repay Him for it, yet it is ours for the taking, a gift from God. Once you have truly grasped this, you will be overcome with a willingness to love Christ and serve Him in any way you can....not because you have to, but because you want to. A grace-filled life is a Christ-filled life - when as Christians we show little grace to others, we are also showing very little of Christ. Yancey tells the story of C. S. Lewis - when asked what makes Christianity different from all other religions, he responded with one word...grace. It is what we need, what the world needs. Yancey's book makes me want to be a full-of-grace person, loving Christ and loving others - not because I feel guilty or fearful, seeking to earn God's love....but as a response to the love God has already given.

This isnt the kind of...

This isn't the kind of book that I'd normally read, but I was struggling with forgiveness and thought I'd give it a try. I'm glad I did. Yancey not only helps to explain what exactly grace means in a Biblical sense, but also why so many Christians seem to be living in a state of what he terms ungrace. Through numerous examples from his own life as well as anecdotes drawn from the lives of ordinary people and nations, Yancey gives us a better idea about what it might look like to practice grace in an every day way. Yancey also doesn't neglect to mention his own struggles with the concept of grace and the idea of extending forgiveness to those people who hurt us as well as those who we hurt. Overall, I thought that the concepts contained in this book were clearly illustrated and a call to people to live with ever greater grace in their daily lives.

This is a quite amazin...

This is a quite amazing book, one I would recommend to all Christians whatever their background, and to anyone who's interested in knowing about Christianity, or indeed anyone who's been hurt by Christians.The book's been criticised by fundamentalists; not surprisingly perhaps since Yancey grew up fundamentalist - and racist - himself. But now he accepts that God is found in many places and people, and can be part of all denominations whether Protestant, Orthodox or Catholic. His writing makes such intuitive sense, and is so well expressed, that I find it hard to see how anyone could disagree with it. This is how the church should be, and it's a massive challenge for the 21st century where Christianity is more often associated with anger and critisism than with compassion and grace.Re-read eight years later, and still found it powerful, even if a little over-political in places.