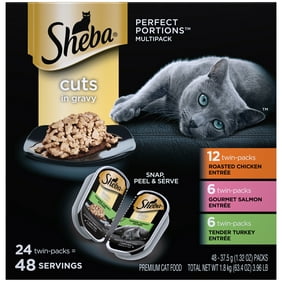 We aim to show you accurate product information. Manufacturers, suppliers and others provide what you see here, and we have not verified it.
This high protein grain-free CORE Pate wet cat food contains wholesome ingredients that are free from carageenan, artificial colors, flavors or preservatives. This protein focused diet gives your cat the energy it needs to thrive.

I have found Wellness Core my favorite to feed my cat Savannah.

My journey was interesting during the fire of 2016 I was given kitty donations of different brands... so we observed in a short time her fur becoming very unkept instead of sleek shiny and her energy waned I put two in two quickly and got her back on wellness core wet and dry!

And quickly she returned to her sleek and energetic happy self!

Nutrients is number 1 and Real Food !

If your animals are getting sick look at the food and water !

It's will save you in $$$ of vet bills and stress!

I hope this was helpful !j

I've switched my kitten to this because she wasn't really liking another brand, and she LOVES this pate, I love that it's really smooth and not like a loaf of meat. She leaves nothing left behind.

Used to love this brand

I loved this brand. I love how there are no fillers and the ingredients are really good for kittens. I have been feeding this brand to my kitten for almost 2 months. About 3 weeks ago, I had to restock, I went to Petsmart and bought the sealed 24 pack of the 5.5 oz cans. When unpacking the cans, I noticed that the entire package may have fallen or been dropped because some cans had dents. I gave the package the benefit of the doubt and bought it anyways especially because it was the only one on the shelves.

In the morning, I opened one can to feed my cat and saw some white stuff on top of the pate. I didn't think it would harm, I just thought maybe it was just some residue from the ingredients. For my kitten's dinner, I was going to fed him the can I opened earlier that day. However, I smelled it, and it smelled somewhat foul. So I grab another can from the batch and open it. There same white stuff was on the top as well. It didn't smell as good as it should have if it were a fresh can. Obviously something was up with these cans. I didn't want to open all the cans so I checked the date and planned to return it. I put both opened cans in sandwich bags to bring to Petsmart to return the next day.

So the next day I notice that gas formed inside the sandwich bags. I went to the store as planned to return all 24 cans. Thankfully, I was able to return all the cans.

I went to Petco to buy the same food and everything was fine. I made sure the dates were all different on the bottom. Until I opened one of the cans recently and there is a little bit of that same white stuff in the can, but only very little. I smell the can and open another can and the other can smelled better and didn't have any white stuff.

Unfortunately, I don't remember the date under the cans of the initial bad batch. However, with the cans I have now, the date is 18 January 2021. All the cans I bought the second time all have the same dates, but I'm not sure why this one can I opened was going bad. I have reached out to Wellness when this initially happened. I got one email from them asking for photos, which I provided, but after that I haven't gotten anything since then.

Written by a customer while visiting wellnesspetfood.com
00