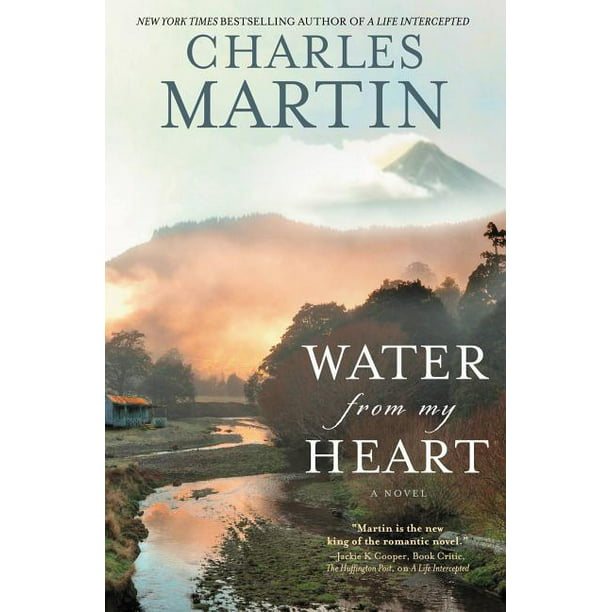 Water from My Heart : A Novel I always enjoy reading books from this author. I have come to love his writing style. It is very poignant and descriptive. He does an excellent job of developing his characters and allowing the reader to feel the emotions . The places he writes about come alive with the picturesque style he is well versed in. Whatever topic the book is about is handled with real precision and he holds nothing back. This is another great book that takes you for a journey of self discovery for the main character who at times seems to focus on his flaws a bit much. Charlie will take an adventure to find someone important to him, but along the way he revisits old hurts that will stir great emotion in him and guide him to a place of comfort and healing. It isn't easy to let go of your past, to be able to forgive yourself for the hurt you have caused others. As the character goes deeper into his journey, his walk will be heavy at times. I loved how the book reminded me that we cannot change our past, but we can make our future better. Letting go of things that have held us emotionally captive is hard but well worth the reward. To be free of something that has defined you negatively for so long is life changing. I loved the way the author also shared something personal at the end of the book. This is one book you will not be able to put down. The story will be one that will stay with readers long after the last page has been read. I received a copy of this book from the Goodreads Free Giveaway for an honest review.

Reviewed by Harley0326Harley0326
Written by a librarything.com customer.
Helpful?
Average Rating:(5.0)out of 5 stars

Charles Martin's latest book, Water from My Heart, is a prime example of why I return again and again to this talented author. Finely crafted and told from the first person perspective of the main character, this novel takes the reader on a journey of moral and spiritual growth. I loved this book and really look forward to discussing it with my book club. Charlie Finn is a man without a moral compass. From childhood he has been allowed and even encouraged to do what it takes to make money and to survive. From selling dope in high school, to playing poker in college and then legal plundering in corporate life, Charlie is never satisfied with the payoff. Living an island dream and helping to run a boutique drug organization, Charlie is finally confronted with the consequences of his choices. When he crosses paths with a woman who lives a life of integrity and compassion, Charlie wonders if he can ever be redeemed. Charlie is an extremely complex character. Despite his many flaws, I connected with him immediately. A lost soul desperate to find meaning, his drifting through life is not so different from many people. As he tells his story through present time action and past recollections, the reader sees the struggles, the guilt and the longing that Charlie endures. As in all of Martin's novels, secondary characters are well-developed and provide great compliments to the story. Rich description brings the setting to life. And the overall theme of redemption is naturally woven throughout the book. Highly Recommended. Audience: adults. Great for Book Clubs.

Reviewed by vintagebeckievintagebeckie
Written by a librarything.com customer.
Helpful?
Average Rating:(5.0)out of 5 stars

Where do I begin? This book has left me with such a good feeling. It tells such a great story of tragedy, poverty, greed, love, forgiveness and redemption. I don't know that I've ever read a book that touched so many emotions. I have read and enjoyed other books by Charles Martin but this one has now added him to my list of favorite authors. I loved, loved, loved this book and will be highly recommending it to everyone! Excellent writing and I am anxiously awaiting more from this author. I was provided a free digital copy courtesy of NetGalley.

Reviewed by belvawbelvaw
Written by a librarything.com customer.
Helpful?
Average Rating:(5.0)out of 5 stars

First book I ever read...

First book I ever read of his....and I have then read every one he has written since!

Reviewed by onionprincessonionprincess
Written by a librarything.com customer.
Helpful?
Average Rating:(4.0)out of 5 stars

Charlie Finn had an un...

Charlie Finn had an unusual childhood and a very unique rest of his life. Charlie played poker, went to Harvard, had a job that ​paid well but ​was a job​ that cost him the woman he loved, and then had another job that gave him a family but also danger. WATER FROM MY HEART was a bit confusing at first because more than one story was going on. It started to come together around Page 100 or so. ​We follow Charlie as WATER FROM MY HEART goes back and forth from past to present. I liked Charlie despite some of the things he did in his life and despite the decisions he made that ruined lives as well as saved and touched lives. WATER FROM MY HEART was a book about loss, life​​, decisions, and regrets. You will learn what the title means and see a redemption in Charlie. The ending was heartwarming. I have read another book by Charles Martin that I thoroughly enjoyed...UNWRITTEN. 4/5 This book was given to me free of charge and without compensation by the publisher in return for an honest review.