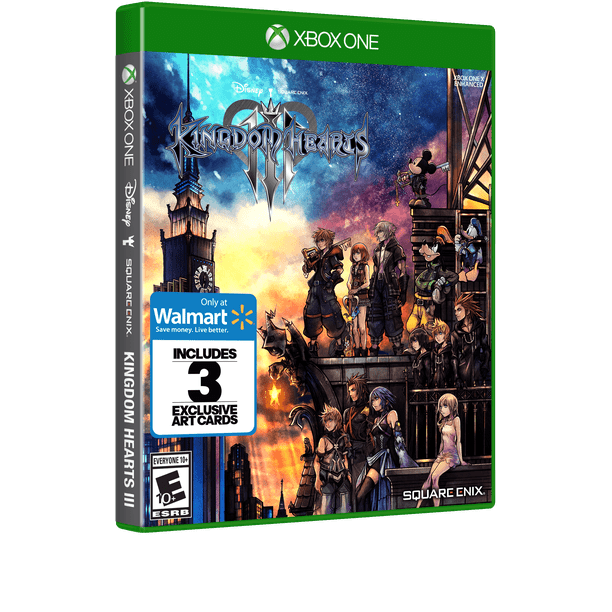 We aim to show you accurate product information. Manufacturers, suppliers and others provide what you see here, and we have not verified it.
Walmart Exclusive: Kingdom Hearts 3 comes with a FREE set of Collectible Art Cards with the purchase of any box edition. A mature Sora sets out on a new adventure. The title will make full use of next-generation console technologies to deliver more exhilarating, action-packed gameplay and various fun features. As a culmination of the series so far, Kingdom Hearts III is shaping up to be an entertainment experience with a grand story of unparalleled scale. Having learned that all the conflicts surrounding "Kingdom Hearts" were a part of Master Xehanort's master plan to cause a Keyblade War, Sora and his friends search for the seven guardians of light to combat the darkness. While King Mickey and Riku set off in search of previous Keyblade wielders, Sora, Donald and Goofy visit various Disney worlds in search of the "Key to Return Hearts."
Adventure in Disney and Pixar Worlds - Embark on an adventure that spans the Disney universe: Travel across Disney and Pixar worlds to protect them from the Heartless invasion, and befriend and join heroes from Toy Story, Monsters, Inc., Big Hero 6, Tangled, Hercules, and more!

Unlock the Power of the Keyblades - The mysterious and powerful Keyblades can now transform into additional forms with new abilities, moves, and animations. Equip multiple Keyblades and combo between them to unlock spectacular attacks!

Experience the Magic - Cast visually stunning, powerful magic spells to battle the Heartless. Call upon Disney-Pixar friends and partner with them for support. Turn the tide of combat by summoning all-new "Attractions" inspired by the theme parks.

Thrilling and Action-Packed Battles - Explore and interact directly with the Disney-Pixar worlds. Fight off swarms of Heartless while scaling massive cliffs, diving deep underwater, or even freefalling through the air. Experience unique gameplay elements custom designed for each new world!

Relive Classic Disney Shorts Through Minigames - Take a break from saving the world with over 20 minigames inspired by classic Disney short films.

My son has been begging for this game ever since it was released .. so u can imagine how excited he was when I gave it to him.. He started getting tearful when watching the beginning of the game .. we had a great laugh ..

A classic game with new adventures to be had. Graphics are really good, plot line is excellent and music is as good as always!