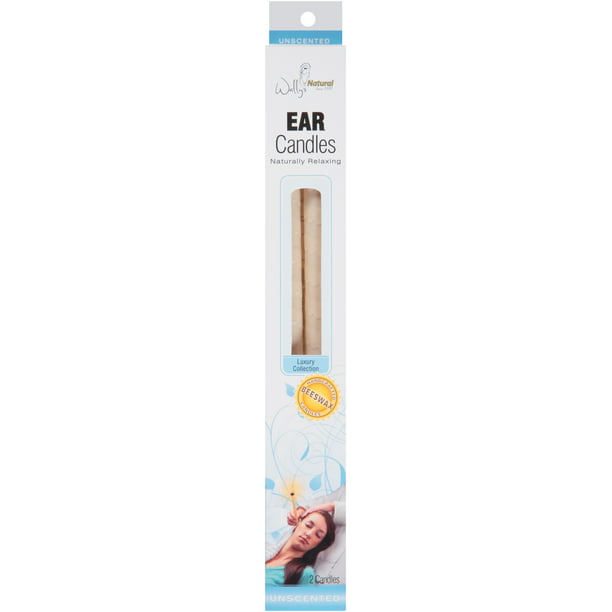 Enjoy these Wally's Natural Unscented Luxury Collection Ear Wax Candles. You can feel the luxury of these fine candles with a no drip filter and handcrafted beeswax. They would be a welcome addition to your relaxation regiment. The fine aroma of beeswax will fill the air, allowing you to engage multiple senses. This beautifully boxed candle set comes with two pieces for your stress-releasing pleasure. The rhythmic sound and feel of the warm air flowing down to your ears will be a special treat. At the end of your day, enjoy Wally's natural ear candles. Feel the tension release and a wave of calm enter as you burn this product. The carefully handcrafted beeswax separates this product from others. The ingredients to these candles are unbleached cotton muslin and purified beeswax. This is a pure and natural product and does not contain chemicals and dyes. Relax and naturally soothe yourself.

safety:Warning This product can expose you to chemicals including lead which are known to the state of California to cause cancer and birth defects or other reproductive harm. For more information go to www.P65warnings.ca.gov

Instructions: Lighting instructions printed on inside of box.

It helped soothe an mid-pain level earache for me.

This is one of those situations where you either believe in them or you don't. All I can tell you is that I was having issues with an earache and after my daughter used them on me, my ear didn't hurt anywhere near as much. It wasn't gone and this isn't a cure, but the heat, while gentle, was soothing.

Was skeptical but the price was right. Purchased two packages for 2 people. Did them before we took a shower, the results were absolutely astonishing. We can both breath better and HEAR better. We're 28 and 29 years old and could not believe how much better we can hear. Read reviews on ear candling in general, they were all positive and negative. We both agreed it was a positive effect and want to use these at least once a month for a few months. Great product, great quality and easy to do. Grabbed a paper plate, cut a hole, wetted some paper towels, pushed the ear candle through, blocked the little hole while lighting the top, once smoke started coming out of the little hole we stuck them in the ear lobe while laying down. Let it char about a inch and a half then cut, all the way down over and over until there was about 4.5 inches of the candle remaining. Let cool, cut open and be astounded!!! So awesome. THANK YOU! P.S. Photos are real, both of my ears after. Huge ear wax chunk came out of my left ear.

Ear hurts and clogged try these

Having war issues and dont wanna go to Drs Id definitely give these a try. My hubby had a ear ache for a week or so and we tried these and holy crap the yuck that he got out of his ears. I was grossed out but he got immediate relief so I was happy.

Works great!! Make sure to read all directions (also some inside the box, rip it open). I made the mistake when i blew off candle to clean the tube

Order was exactly as advertised. It arrived promptly and was used immediately. I feel so much better! Thank you for your excellent service.