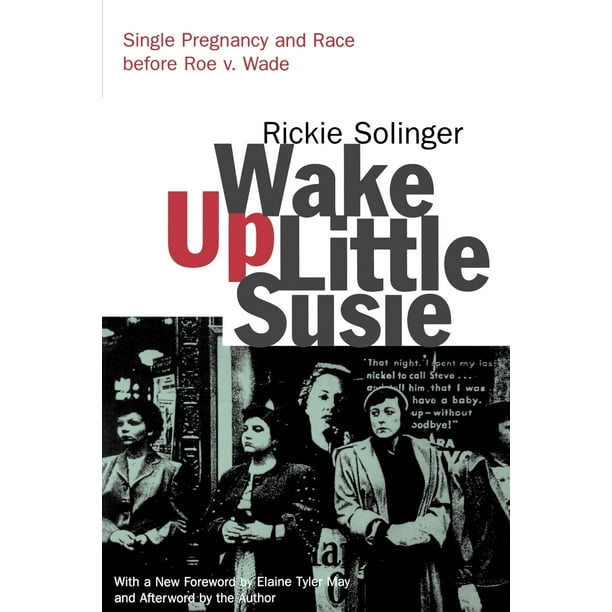 We aim to show you accurate product information. Manufacturers, suppliers and others provide what you see here, and we have not verified it.
First Published in 2000. Routledge is an imprint of Taylor & Francis, an informa company.Wake Up Little Susie: Single Pregnancy and Race Before Roe V. Wade (Paperback)

January 22, 2009: This is a great study on what it was like for women, both black and white, to deal with pregnancy outside the institution of marriage. This book is well-researched and it reads like a book you would read for a college class so it is not something to just pick up and read on the beach. This book is highly informative and easy to read. The author has organized each chapter well and there is an extensive biography at the end of the book in case readers are interested as to where she obtained her information or who are interested to get other books on the same topic. This book took me awhile to get through because it is not light reading. It is dense and has a great number of arguments and details in it but its worth the read if you are interested in post-WWII unwed pregnancy and how different the experience was depending on your race. This book definitely makes the female readers of today grateful for the Roe v Wade case that made abortion a legal practice in this country. I would only recommend this book to people who are truely interested in the subject matter. Otherwise you will find this book dry and boring.

Written by a customer while visiting librarything.com
10
Average rating:3out of5stars, based onreviews

What it meant to be pregnant and unwed in the US from 1945 to 1965. Basically, it sucked. But, it sucked for white women and black rather differently. Both were expected to be ashamed, but white women were usually forced into maternity homes, where they could be pregnant in secret, and then give their infant up for a secret adoption (nevertheless, according to a 1957 survey, some ~30% of white women kept their babies). But because there was a demand from prospective adopters for white babies, but not black babies, black women were not offered places in maternity homes, and were expected to raise their babies. Amazingly, white women who petitioned to be allowed to raise their babies were judged unfit by reason of mental instability (after all, what sane woman would ever want to be an unwed mother!), while black women who tried to give their babies up for adoption had a hard time of it--some where even charged with child abandonment! And as for abortions--just by petitioning to have one, a woman proved herself to be so lacking in morality that she deserved the punishment of bearing and raising a child.So many white unmarried women had the pain of a forced adoption, whereas many black unmarried women had the pain of forced child-rearing. And then, for extra fun, the black women who were forced to keep their children were thought to prove that black people were just naturally so animalistic that they couldn't think straight enough to not have sex and bear lots of babies. And ooh, also, they were the cause of all social programs and poverty in America! Which is particularly funny, cuz most social programs not only paid barely enough to keep people alive, but also, excluded people of color! This was a stunning book, and I pretty much wanted to cry and rage half the time I was reading it. I found it such hard going, in fact, that I ran out of library time and have to return it, having only skimmed the last few chapters. I'm sure there's some important stuff in here that I've missed. A few quotes I found particularly worthwhile:"Race, in the end, was the most accurate predictor of an unwed mother's parents' response to her pregnancy; of society's reaction to her plight; of where and how she would spend the months of her pregnancy; and most important, the most accurate predictor of what she would do with the 'fatherless' child she bore, and of how being mother to such a child would affect the rest of her life...race-specific public and private responses to single pregnancy, between 1945 and 1965, have profoundly influenced the race-rent politics of female fertility in our time." "An unmarried black pregnant girl looking for help in the early decades of the twentieth century could probably have found assistance only within her own family and community. Most maternity homes excluded blacks; most of the few government assistance programs that existed excluded unmarried mothers." "White illegitimacy was generally not perceived as a 'cultural' or racial defect, or as a public expense, so the stigma suffered by the white unwed mother was individual and familial. Black women, illegitimately pregnant, were not shamed but simply blamed, blamed for the population explosion, for escalating welfare costs, for the existence of unwanted babies, and blamed for the tenacious grip of poverty on blacks in America. There was no redemption possible for these women, only the retribution of sterilization, harassment by welfare officials, and public policies that threatened to starve them and their babies."